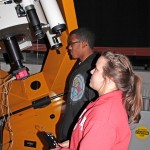 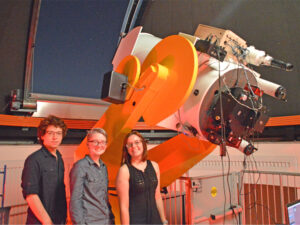 Photometry is the measurement of light.  At the Adams Observatory, we look for variations in the amount of light detected from a star, perhaps caused by an object (exoplanet or binary star companion) transiting in front of the star or by the inherent variability of the star.

Exoplanets: The Adams Observatory is one of a select number of observatories around the world to conduct follow-up photometric observations for NASA’s Transiting Exoplanet Survey Satellite (TESS) mission.  Austin College students have appeared as co-authors on discovery papers for hot Jupiters, multi-planetary systems, and potential Earth-like planets.

Research on the nature of high- and intermediate-mass stars at Adams Observatory has resulted in numerous publications to date, and we continue to seek out the answers to important unanswered questions. We have used spectroscopy (the splitting of light into its constituent colors) to study the physical traits of such stars, and have made discoveries that have revealed previously unseen traits, new binary stellar companions, and the spectral classifications of numerous stars, to name a few. 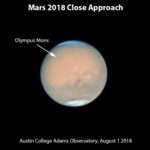 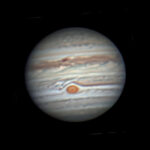 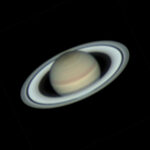 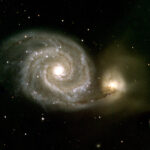 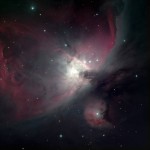 Planetary Imaging: Sometimes we get lucky – lucky imaging, that is!  This technique uses a high-speed, low-light video camera to capture thousands of image frames.  The best (luckiest) frames are then stacked together to produce high-quality images.  Students have imaged Jupiter’s Great Red Spot, Saturn’s magnificent rings, and the dusty red planet Mars during its closest approach to Earth.

Astronomical Imaging: Students in Dr. David Whelan’s JanTerm courses take images of clusters, nebulae, and galaxies using the Adams Observatory’s imaging camera. Images are secured using red, green, and blue light filters and the resultant images are therefore in full color. These keepsakes are treasured by many students, both past and present.