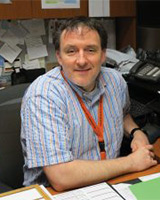 Alex came to Austin College in 1986 knowing he wanted to pursue an M.D./Ph.D. He had already worked in biomedical research as a high school student and earned a scholarship to Austin College from the King Foundation. So, he took all the required math and science for medical school, but beyond that, he pursued a balanced load with majors in philosophy and political science. One-third social science, one-third humanities and one-third physical science equaled a valuable liberal arts education for him.

“I took evolutionary biology at Austin College,” he said. “That’s not particularly relevant to medical school but I was interested in it. As I’ve progressed, I find I use those same kinds of models to determine how cancer works. Natural selection and genetic variation are key in the study. That unlikely background from my coursework at Austin College has been helpful in my work today.”

Alex also spent hours as co-director in Dr. Kenneth Street’s social Science Lab. “A lot of surveys passed through the lab, and we did fairly complex statistical analysis, particularly during election years, handling polling of local candidates, including the mayor of Sherman and local congressional districts. That coursework taught me how to structure data, and I use that knowledge now with genomic data,” he said.