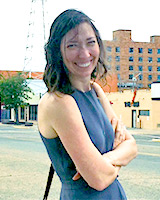 “When I started Austin College, I thought I would just take a couple of Spanish classes to fulfill my language requirement. Thanks to AC’s engaging Spanish department, by the time I graduated, I had spent a year in the Jordan Language House, spent a Janterm in Spain, and was awarded a Fulbright Scholarship to Spain. Though my primary focus in undergrad was physics and math, the Spanish classes I took prepared me well for my time in Spain. Since then, my ability to speak and read Spanish has been important for every job I’ve had – from working as an analyst at an oil and gas company, to working as a legislative director for a state representative, to my current role as a legal aid attorney working with underserved populations. I’m so grateful that I had the opportunity to learn Spanish at AC, where classes were both effective and fun.”