The Austin College Center for Southwestern and Mexican 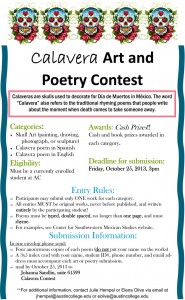 Studies has announced a Calavera Art and Poetry Contest in connection with the Day of the Dead (All Souls Day), celebrated November 1 and 2, particularly in Mexico, where it is a national holiday. Calaveras literally means “skulls,” and also refers to traditional rhyming poems written about death that are recited on the Day of the Dead. The practice is more than 500 years old. The Day of the Dead is a celebration and remembrance of those who have died.

“These satirical poems poke fun at people in a way that suggests they’re dead, even though they’re alive,” said Julie Hempel, associate professor of Spanish and director of the Center for Southwestern and Mexican Studies. “Often the people being satirized are politicians and public figures and the poems make fun of these individuals in a safe, accepted way. Many people also write these poems for friends and family members as a joke and to point out that we all end up in the same place in the end.”

Contest categories include skull art in painting, drawing, photography, or sculpture; calavera poems in Spanish; and calavera poems in English. Prizes will be awarded in each category. All entries must be submitted to Johanna Sandlin, Campus Suite 61599, by Friday, October 25, at 3 p.m. See entry rules and calavera examples.