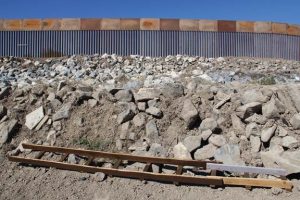 Artist and 1992 Austin College graduate Scott Nicol will have an exhibit of his work, “Ladders and Walls,” on display at the College October 22 through December 10 in Dennis Gallery of Forster Art Complex. His exhibition of photographs and sculptures related to the South Texas border wall is presented by the Austin College Department of Art and Art History. Gallery viewing is by appointment only. Call 903-813-2283 for information or to schedule a visit.

In this instance, artist Scott Nicol will install the exhibit Thursday, October 21, through Saturday, October 23, with a public lecture and discussion at 1:30 p.m. on Thursday, October 21, in Forster. He will construct a sculpture made from discarded ladders used to scale the South Texas border wall, and he will use a suite of photographs depicting the landscape, the river, and people who make up the South Texas communities affected by the construction. During Homecoming, an Artist’s Reception will be open to alumni in Dennis Gallery on Saturday, October 23, from 5 to 6:30 p.m.

Nicol is a South Texas teacher, artist, and activist. Since 2007, he has been educating the public and the media about the border wall. He is a founding member of the group, No Border Wall, a coalition of environmentalists, ranchers, and immigration advocates. In 2018, he testified before the U.S. House of Representatives Natural Resources Committee, and he has published articles and op-eds in magazines and newspapers, including the Texas Observer, the Christian Science Monitor, and the Austin American Statesman. Texas Monthly, Scientific America. His work has also been featured on NPR and many other outlets.

Writing about the exhibition, Nicol explains his philosophy, “As soon as the first border walls went up in South Texas, ladders began to accumulate alongside them. This is no surprise—it has always been the case that where there are walls, there are ladders. Walls built along the U.S. –Mexico border are an attempt to manifest an abstraction, to make a ribbon of ink on a map into concrete and steel on the landscape. Ladders are a subversion of that effort, revealing the futility of attempting to wall off the border. Scrap lumber and a handful of nails defeat barriers that have absorbed billions of federal dollars.”

He goes on to explain the materials of his exhibit. “The rough manufacture of the ladders also points to the hands that built them, the people that so much national treasure is devoted to repelling. Scraps of salvaged and splintered wood are cobbled together by people who are fleeing violence and poverty. They use what is at hand as they reach for a better life. But in the United States, we fear poverty, and we reject those who suffer from it. We hide behind our walls.”

“It is the materiality of the ladders, with bent nails, weathered wood, and muddy footprints on their rungs, that conveys this,” the artist continues. “Largely unaltered, they speak to their brief usage. So too, the inner tube, still caked with mud from the Rio Grande, speaks of the person (or family) that rode it across the river. The photographs taken from the Pacific to near the Gulf of Mexico offer glimpses of the border that has come into being as the United States has erected its walls. The work in this exhibition is composed of fragments, like pottery sherds dug from the earth, around which larger stories can be pieced together.”

Nicol’s main artistic practice, which often involves the use of natural materials that maintain their original identities and references, arose from time spent in the rainforests of Venezuela and Ecuador while a student at Austin College. From that time forward much of the meaning of his artwork was inherent in the natural forms and objects that composed it.

During graduate studies at The University of Texas at San Antonio, he reestablished contact with the rainforest, traveling to Costa Rica to construct work in an ecosystem similar to those that had so powerfully influenced the early evolution of his art. Upon receiving his degree, from 2000 through 2005, he taught college courses on the creation of art utilizing the natural materials of the rainforest at the La Suerte Biological Field Station in Costa Rica, as well as landscape drawing at the Ometepe Biological Field Station in Nicaragua. These intensive classes addressed not only the technical issues involved in making art in response to a tropical ecosystem but also the conceptual frameworks that influence students’ perceptions of the forest.

Nicol is currently an assistant professor of visual arts at South Texas College. Concurrent with his educational vocation he has engaged in activism and scholarship tied to the border walls that have, for more than a decade, been built within a few miles of his home. This has led him to testify before Congress and engage with the press, as well as speak about the impacts of border walls at academic conferences and write about them for the American Civil Liberties Union (ACLU) and other organizations.

Austin College, a private national liberal arts college located north of Dallas in Sherman, Texas, has earned a reputation for excellence in academic preparation, global awareness, pre-professional foundations, leadership development, committed faculty, and hands-on, adventurous learning opportunities. One of 40 schools profiled in Loren Pope’s influential book Colleges That Change Lives, Austin College boasts a welcoming community that embraces diversity and individuality, with more than 50 percent of students identifying as persons of color. The residential student body of approximately 1,300 students and an expert faculty of more than 100 educators allow a 12:1 student-faculty ratio and personalized attention. Related by covenant to the Presbyterian Church (USA), Austin College cultivates an inclusive atmosphere that supports students’ faith journeys regardless of religious tradition. The College, founded in 1849, is the oldest institution of higher education in Texas operating under original name and charter.