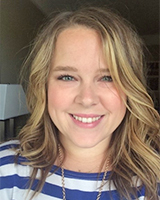 Aryn Hays graduated from Austin College in 2014 with a major in Physics and minor in Mathematics. During her time at Austin College she was a member of Alpha Delta Chi, Zeta Chi Beta and the Society of Physics Students serving as the organization’s president her senior year. She was among the first students to use the Adam’s Observatory and used the telescope to capture its first images of Jupiter, as well as hosted star parties for classmates, Austin College leadership, and elementary school kids among others. Aryn is also very proud of the work she did with Dr. David Baker and classmate Graham Crannell to take measurements in preparation for the installation of the solstice calendar that is housed in the atrium of the IDEA Center.

After Austin College Aryn went on to complete a master’s degree in Mechanical Engineering from Louisiana Tech University. Now she works as a process development engineer for Cree, Inc. in Fayetteville AR. Aryn is passionate about her work with Cree as the company is working closely with automotive industry leaders in an effort to standardize efficient electric vehicle solutions. In her spare time Aryn enjoys spending time with her friends, family and catahoula mix dog, June. She is also actively involved in a local volleyball club.