Every winter, a cluster of Austin College students are immersed in world politics, culture, women’s issues, crises in the environment, and more. Most times, those intense dives have little to do with U.S. politics, instead, they are working to fully understand the political and cultural positions of a world country assigned them for the National Model United Nations Competition in New York City. They must be aware not only of the positions of the assigned country but also of the allies, neighbors, and perhaps enemies of that nation. In 2022, 16 Austin College students joined students from over 100 universities to represent diverse political interests on the world stage. 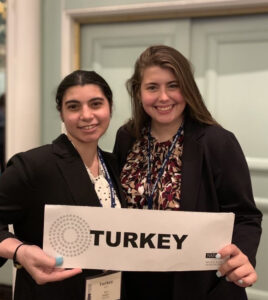 Austin College was assigned to represent the Republic of Turkey in this year’s conference. Students worked in different UN committees, such as the General Assembly 1, UN-Habitat, and the United Nations Environmental Assembly to pass collaborative resolutions aimed at addressing important, real-world issues.

After a semester of preparation, the week of fast-paced meetings and sessions passes quickly. Position papers are written on the go as decisions and votes are reached within committees.

When all the speeches, caucusing, writing, and voting had finished, the Austin College team brought home “Distinguished Delegation” recognition, along with an Outstanding Delegate honor for Andrew Fugitt ’23, a peer-voted award. 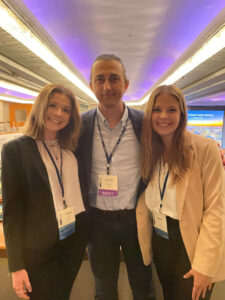 Students obviously learned about politics in the program, but Dr. Ruchan Kaya, assistant professor of political science who accompanied the students this spring, said students learned much more. “Not only did students connect and network with peers from all around the world,” he said, “they were afforded the invaluable opportunity to learn about the nuances of international professionalism.” In addition, students could put their skills in public speaking, writing, and leadership into play.

Two experienced NMUN participants—Head Delegates—led the class in weekly preparation for the competition, instructing them in rules of order and other important knowledge about the conference and their country’s positions. This spring, the Head Delegates were seniors Katie King and Madison Weimer, both with several NMUN experiences behind them. King has previously represented Ireland and Argentina. Weimer has one more year of competition and was a member of the Cuba delegation.

Both leaders agree that MNUN is an amazing experience for all students, regardless of their majors. The participants grow in areas such as public speaking, teamwork, diplomacy, research skills, writing skills, communication, and generally learning to open one’s mind to different points of view from people all around the world, King said.

In New York, the Head Delegates continued to work with the Turkey delegation to be sure that students were getting to speak and getting Turkey’s position in front of committees. They also were on hand to make sure that the Austin College delegation was doing everything possible to deliver excellent representation and to grade their students on their involvement. Additionally, take care of technology glitches and of only taught the proper procedure for the conference, but also supported them throughout it (e.g. providing water and snacks and addressing issues with other delegations). As well, one of our head delegates had the opportunity to have a leadership role in the conference and help run the sessions smoothly by being a vital role on the dais.

Head Delegate Weimer also served as a “Chair” on the Dias in the UN Environment Assembly (UNEA). She explained the role as being part of the panel that oversees and controls the committee and runs the sessions. “In being a chair, I was able to take roll call, do background work for the director and assistant director of the committee, and I was fortunate enough to lead a large amount of the committee sessions, where I would call for motions, go through the speaker’s list, make announcements, and go through a little bit of the Voting Procedure,” Weimer said. “I simply applied on the NMUN website as they are always looking for students who have done MUN in the past to volunteer for this position. Reflecting on the opportunity, I have decided that I want to apply for the NMUN staff for next year to continue with NMUN in my career. It was an amazing opportunity, and I would give anything to do it again! I highly suggest it to more experienced students who would like to have a leadership role within the conference and get to interact and network with the staff of the conference.”

While both Head Delegates were drawn to Model UN by their interest in international politics, like many groups at Austin College, a bond formed between the participants over the weeks of work. Since some of the members participate many times, the bond becomes quite strong. “It’s more than a class, it is a family and a team that grows together to network with hundreds of fellow delegates from around the world. In doing MUN, you get to have a voice and help solve global issues the world is facing today, and it has shown me what I want to do for my career. Moreover, MUN has opened my eyes to be more open-minded, passionate about my views on issues, and be better in the classroom,” Weimer said. “Students gain an experience in having a “MUN family” in the sense that you create lifelong relationships with people not only from Austin College but international students from the conference.” 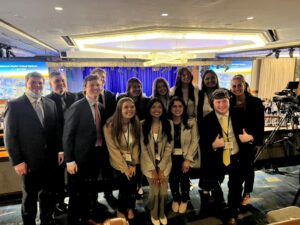 After a semester of preparation and a week of tireless work, the Austin College Model United Nations Team returned to Sherman with the title of “Distinguished Delegation, and delegate Andrew Fugitt received a peer award.

When it was all over, was the Head Delegate work worth it? Seeing this amazing group of students progress throughout the semester and watching them participate successfully as the Republic of Turkey in New York was so fulfilling,” they said. “We were so honored just to be a part of it. Proud is an understatement.”

King plans to attend law school and hopefully, one day provide legal counsel to the CIA or Justice Department. Weimer’s plans are not as set, though she does want to participate in NMUN staff for 2023 and is seeking jobs within international relations.