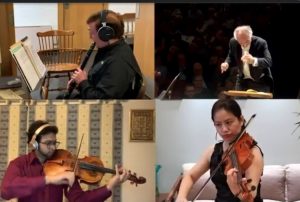 Earlier this month, orchestras around the world were scheduled to celebrate the 250th anniversary of Beethoven’s birth with special concerts. May—May 7 in particular—was significant as the date that Beethoven’s  famous Symphony No. 9 premiered in 1824 in Vienna.

When the global pandemic led to postponement of those celebrations, Dr. Richard Zielinski, artistic director and conductor of the Classical Music Festival Eisenstädter Sommerakademie  held each year in Austria, determined that the birthday and May 7 remembrance should not go unnoticed.

The conductor wanted to tap into what he called the “unifying power of music” and provide “positive message of fellowship, harmony, and reason.” He created Project Freude-Joy! through a combination of a prior concert and new performances by musicians from around the world. Some of those performers have Austin College ties.

For nearly 30 years, Dr. Ricky Duhaime of the College’s Music Department has been a principal member of the international orchestra performing at the summer festival in Eisenstadt. As continuing faculty of the music institute, he has been able to share the festival experience with several of his students through the years as well.

Zielinski’s resulting YouTube “collage concert” of excerpts from the 9th Symphony, shows Duhaime on clarinet plus alumni Rizwan Jagani ’15 on viola,  on stage in the concert and in home recording sessions, particularly beginning around the 8-minute mark of the video.

“We hope this performance will help bring some joy during these unsettling times and serve as a positive message of fellowship, harmony, and reason,” Zielenski said in announcing the effort.

The performance included was recorded in Haydnsaal of Esterházy Palace in Eisenstadt.