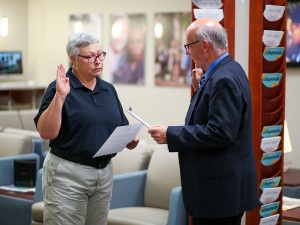 Kelle Kennemer, formerly of Collin College police department, has been named the new director of Public Safety/Police Chief for Austin College. She was sworn in January 6 on campus with several area law enforcement officers in attendance.

Kennemer is an advanced licensed peace officer in the State of Texas with 17 years of law enforcement experience in higher education at both private and public institutions. She previously worked on the Austin College police force from 2002 to 2009, and holds certifications in a number of areas including sexual assault, active shooter response, and mental health officer designate.

“The knowledge she gained from her initial appointment here, along with her experiences at Collin College provides a solid foundation from which she will lead our efforts to create a first-class, effective campus-wide safety program for all members of the campus community,” said Tim Millerick, vice president for Student Affairs. 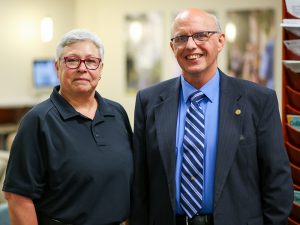 Chief Kennemer succeeds James Perry as police chief upon his retirement January 3, after 37 years of service to the Austin College police force.

She lives in Sherman with her husband, John Kennemer, who serves on the Command staff of the Sherman Police Department. The Kennemers have two children and two grandchildren.