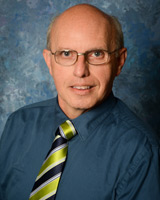 Back in 1982, James Perry arrived on campus as a 25-year-old patrolman looking to strengthen his resume then move on to a municipal police force somewhere. “Instead of moving on, I found ways to move up internally over the years,” he says “I’ve stayed energized with new responsibilities and able to fulfill new expectations.”

Now, 37 years later, Perry has worked patrol, served as training coordinator and a crime prevention officer, rose to sergeant under former chief, Larry Caylor, and became Austin College Chief of Police in 2011. Chief Perry will take his final patrol on January 3, 2019 before retiring to his new home near Lake Texoma.

The College police force has seven positions and is a commissioned law enforcement agency within the state of Texas. Perry says that not only have his job titles changed over the years but also the tools the force uses to keep the campus secure.

In the 80s the campus served as a short cut for folks to pass from nearby nightclubs to their homes farther east; cars were decked-out with pricey after-market stereos and loose change in the console; and the residence halls were locked only from 8 p.m. to 10 a.m.—yet somehow the pizza delivery guys knew the key code anyway.

Like in most aspects of life, computer technology and video surveillance capabilities have changed security expectations on the campus. “We went from mechanical punch codes to residence halls locked 24-seven, with full access to residence with key cards.” In 1987, Perry was asked to be the point person for the initial access system and has helped maintain the system updates since then.

“Initially we had 12 card readers to now we have about 86 readers campus wide. This allows flexibility while providing safety. For instance, a student doing timed checks in a science lab can do that with ease. You would not have had that 30 years ago,” Perry said. He also pointed out that car break-ins are rare since people have their music and money on the cell phones in their pockets–there are no stereos or loose change to take.

He said the residents’ shenanigans have kept the job interesting and kind of light-hearted. “It’s been funny over the years,” he said. “Traditions have come and gone—such as it used to be an April Fools’ joke to decorate the ‘Quest,’ (sculpture in Zauk Circle) such as with graduation regalia or eye glasses; or dunking people in the fountains on their birthday.”

Perry served on the credit union board of directors, benefits committee, and staff council and was honored as Employee of the Quarter in 2013. He’s seen a lot at Austin College. “I would see a couple having an argument late at night,” he said, “and, I would stop and try to help them talk rationally and respectively. That’s doing them a real service. Couples counseling at 2 a.m. outside of Caruth? You bet…it’s happened.”

Perry is probably qualified for that police responsibility since he and his wife, Linda, will be married 40 years in April. They have one son and daughter-in-law and two grandsons. He will continue to serve Austin College as an independent investigator for Title IX cases, as needed. But for retirement, he says his expectations include volunteering at regional museums and elementary schools, traveling, and having time to garden.