Austin College’s top honors for campus leadership and involvement during the 2019-2020 academic year were announced this week. The annual Student Affairs Leadership Awards highlight the contributions to the campus community of a wide variety of individuals, organizations, and programs.

Top honors went to Outstanding Senior Woman Katie Siebert of Medina, Texas, and Outstanding Senior Man Seth Howard of Lantana, Texas. These awards are presented to a graduating senior man and woman based upon scholastic achievements and co-curricular involvement, including membership and leadership in student organizations, committees, or athletic teams, and participation in performing arts, intramurals, and community service. 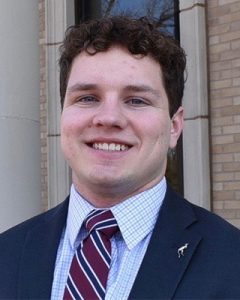 Outstanding Senior Man Seth Howard completed majors in business finance and economics, as well as Departmental Honors in Economics. He served as vice president of Student Assembly in 2019 and was head tutor in the Academic Skills Center peer tutor program. He also was a TEDxAustinCollege speaker and is a member of Phi Beta Kappa and Alpha Chi honor societies as well as the Omicron Delta Epsilon honor society for economics. He is a member of the USA powerlifting team, competing internationally. He also was a Communication/Inquiry Leader and served on many committees of the College. Seth, son of Jeff and Elizabeth Howard, will attend the University of North Carolina-Charlotte this fall to begin study toward a master’s degree in economics and mathematical finance. He plans to pursue a Ph.D. in economics. 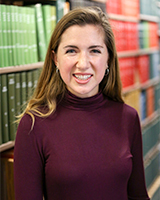 anding Senior Woman Katie Siebert of Medina, Texas, completed a major in economics and a minor in Spanish. Last year’s winner of the Goodloe Lewis Scholarship Award for student leadership and involvement, Katie has been captain of the tennis team, president of Students Today, Alumni Tomorrow (STAT) ambassadors, and vice president of the Student Athletic Advisory Committee (SAAC). She was selected as a 2019 Global Outreach Fellow, traveling to volunteer in Cusco, Peru, with special needs children in a hospital and teaching English to 4-year-olds in a kindergarten. She also served on Student Assembly and as a Communication/Inquiry Leader. She is a 2020 Fulbright alternate for the English Teaching Assistantship in South Korea. Her parents are Frank and Susan Seibert of Medina. She plans to work as an economics analyst to better understand immigration and how that impacts healthcare economics. She hopes to then attend medical school and work with immigrants and lower socioeconomic individuals. 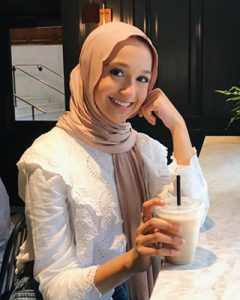 Amna Haque of Plano, Texas, was named Outstanding First-Year Student. The award recognizes a first-year student who has excelled in leadership and scholarship and has demonstrated leadership potential. After nominations from faculty, staff, and student leaders, nominees are invited to apply. A committee reviews the applications to make a final selection.

Amna quickly became involved in all aspects of the Austin College community. She is a Student Assembly representative, a Students Today, Alumni Tomorrow ambassador, and a freshman representative for the Muslim Student Association. She also was involved in the Pre-Medical Society, Biology Interest Group, and the Student Organization of Modern Art. She began a service project in high school that she continues as a student, A Small Kindness, through which she sends hygiene resources and educational material to local and international underserved communities. She has written an unpublished illustrated children’s book, Heroes of the Village, that she send abroad with her products. The book is translated into Spanish and Urdu. She also is an active volunteer in her home community, serving with Baylor Scott & White Medical Center in Plano, and with Heart House, ICNA Relief Clinic for the Underserved, and Ronald McDonald House Charities, all in Dallas. At Austin College, she also has volunteered through the Service Station with First We Serve and was a volunteer for the annual ’Roo Boo. She also has done service for the community organizations MasterKey Ministries, the Texas Ramp Project, the Crisis Center, and Meals on Wheels. Planning to complete a major in anthropology, Amna is the daughter of Arshi and Azamul Haque. 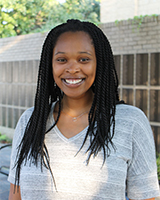 Senior Alisa White of Arlington, Texas, was named the Oscar C. Page Servant of the Year based upon self-motivated willingness to perform service to the community. The award honors Austin College President Emeritus Oscar Page (serving 1994–2009) for his emphasis on the values of servant-leadership and his example of volunteer efforts. Alisa was a member of the Service Station Board and was able to apply her medical interests during her volunteer work in Thailand as a 2019 Global Outreach Fellow. She received the Robert Rogers Volunteer Service Scholarship in 2019. A senior with a major in biochemistry and minors in Spanish and leadership studies, Alisa is the daughter of Eastlyn and Michael White of Arlington, Texas. She plans to pursue a career in medicine and enrolls in Texas Tech University Medical School this fall, having received Early Acceptance. 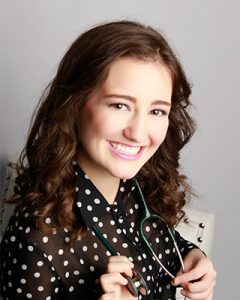 Senior Shelby Bagby of Forney, Texas, received the Henry Bucher Global Citizen Award based upon her service and study in a variety of cultural and international contexts as well as service to the Austin College campus community. This award honors Henry Bucher, chaplain emeritus and associate professor emeritus of humanities whose tenure at Austin College was been distinguished by consistent commitment to service and study in a global context.

Having completed a Departmental Honors thesis in Spanish and with a career planned in medicine, Shelby completed a Global Outreach Fellowship during summer 2019 in Lima, Peru, and the rural city of Pachacutec through International Volunteers. The experience confirmed her aspiration to provide for a community in need of a bilingual physician in Spanish-speaking populations. This fall, she will attend Texas Tech University School of Medicine and pursue a career as a physician. She is the daughter of Jeffrey and Sherry Bagby. 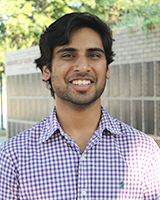 Completing majors in biochemistry and business finance, Hersh is an active member of Alpha Phi Omega national service fraternity, treasurer of Indian Cultural Association, and is captain of the KangaRAAS competitive Indian dance team. The rising junior is also a member of the Service Station Board, Student Assembly, and Zeta Chi Beta social fraternity. He is the son of Nalin Patel and Jayshira Vekaryia of Richardson, Texas.

The Robert Bradshaw Memorial Scholarships were endowed through contributions of family, friends, colleagues, and a special gift from the graduating Class of 1994 in memory of Bradshaw, who served as vice president of Student Affairs for 10 years before his untimely death. This awards recognize the male and female rising junior or senior who have demonstrated exceptional leadership through involvement in co-curricular activities at Austin College. 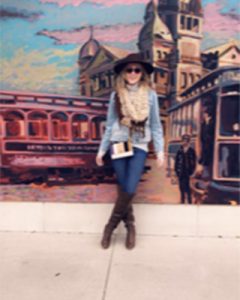 Abigail Ross, a rising senior from Frisco, Texas, is the 2020 female recipient. She has served as a Judicial Peer Representative and on Caruth Hall Council. She is a member and leader of Kappa Gamma Chi social sorority, having served as chaplain, secretary and service chair of the chapter. She is also a member of the Greek Review Board. She presented during the Austin College Student Scholarship Conference as a freshman and a sophomore, and has served as an Admission Office volunteer with the Austin College Experience. She also participated in the SEPA grant writing internship with New Life House in Durant Oklahoma. Majoring in English with a minor in education, she is the daughter of Richard and Tracy Ross. 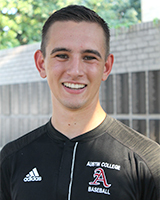 Rising senior Aneurin Minson of Scottsdale, Arizona, is the 2020 male recipient. He is a member of the Austin College baseball team and is his team’s representative on the Student Athlete Advisory Committee. He also serves as a Peer Wellness educator and served this year as intern for the Austin College Student Scholarship Conference. He served as a co-chair of the Service Station Board during the 2019-2020 academic year. Majoring in business administration and communication, Aneurin is the son of Jennifer Minson of Scottsdale and Douglas Minson of Boonton, New Jersey.

These awards recognize one male and one female student who have demonstrated exceptional volunteer service to the Austin College community or in the Sherman area.

Rising seniors Megan Goyal of Irving, Texas, and Will McCarthy of Waco, Texas, are the 2020 awardees. 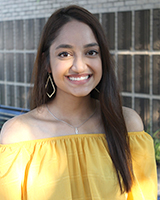 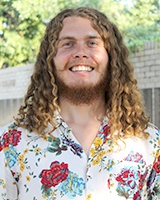 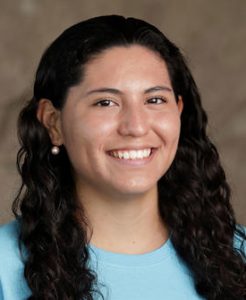 Rising senior Nancy Pineda Gama of Dallas, Texas, received the Nelda Lambert Work Study Excellence Award, which honors the loyalty, efficiency, and special contributions that the late Nelda Lambert made to Austin College as a longtime member of the Student Affairs staff. The award is presented to a student employed in a work-study position who reflects the excellence Nelda embodied in her work. The daughter of Margarita Gama, Nancy was honored for her initiative and dedication in the Office of Career Services.

Student organizations also were recognized for achievements in scholarship and leadership on the campus and in the larger community.

The Greek Organizational Excellence Award was presented to Alpha Delta Chi sorority. The award recognizes the Greek organization that has excelled in scholarship and leadership and has demonstrated service to the Sherman and college communities. Austin College Greek Life uses Standards of Excellence to ensure that all Greek groups highlight service, organizational management, recruitment, membership development, and academics. 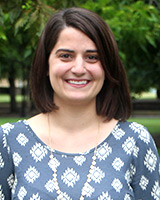 Dr. Catie Paterson, sponsor of Kappa Gamma Chi was named the E. Don Williams Outstanding Greek Sponsor for 2020. That award was named to honor the significant and long-term sponsorship of a campus Greek organization by Williams, emeritus professor of mathematics, who taught at Austin College from 1970 to 2013. Patterson is assistant professor of mathematics and computer science.