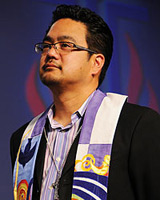 Austin College President Marjorie Hass has announced that the Reverend Bruce Reyes-Chow will present the sermon at the College’s Baccalaureate service on Saturday, May 14, as part of the weekend’s Commencement activities. He will be awarded an honorary doctorate during the Commencement exercises on Sunday.

He is a frequent blogger for his own site and others, such as the online blog for the San Francisco Chronicle, and formerly co-hosted a weekly religion podcast called “God Complex Radio.”

The minister also is an instructor on “Social Media and Ministry” at McCormick Theological Seminary and serves on the boards of Public Religion Research Institute and California Faith for Equality.

The grandson of Chinese and Filipino immigrants to California, Reyes-Chow was raised in Sacramento and Stockton and has lived in San Francisco since 1989. He graduated from San Francisco State with a major in sociology, philosophy, and Asian American studies in 1991 and received his graduate degree from San Francisco Theological Seminary in 1995. Ordained that year, he also has served the Presbyterian Church (USA) as a preacher, worship leader, and keynoter.

He and his wife, Robin Pugh, have three daughters.