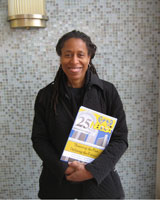 Lisa M. Brown, associate professor of psychology, attended the National Black Graduate Student Association Conference in Dearborn, Michigan, during spring break as something of a celebrity. The 25th anniversary conference, according to the program website, “celebrated the achievements and continuous successes of this organization as well as defining new horizons to strengthen the development of emerging Black scholars. Hence our theme this year carried that message through ‘Honoring the Past, Defining the Future.’”

Lisa was one of the six founders of NBGSC in 1989 in Ann Arbor, Michigan, and that conference developed into the NBGSA. As a young graduate student at University of Michigan, she and five other graduate students from different disciplines had the idea to hold a conference as an opportunity to share scholarly research, offer professional mentoring and networking, and gain faculty guidance through a few workshops. Looking back to that beginning, Lisa said they were surprised that it actually turned out—but that even after the first conference they didn’t really think of it as something that was going to happen every year. She did attend the third conference at UC-Berkeley, and was the faculty advisor for the conference when it was held at University of Florida when she was a faculty member there several years ago.

“It was humbling to be there this spring and see that this conference idea we had begun 25 years ago still exists, and even more, that it has developed into a self-sustaining organization,” Lisa said, adding that many beyond the six founders have had pivotal roles in the growth and continuation of the event and organization. The founders, who were honored at the 25th anniversary, were a bit overwhelmed by the fact that something that seemed so local and immediate has become national and sustaining, Lisa explained. She said that planning the conference provided a huge part of her socialization as to how to organize and manage things. 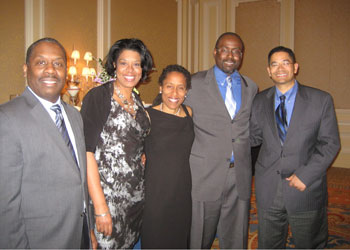 In the founders session at the 2013 conference, Lisa told participants that when it all began, she was in her first semester of graduate school and didn’t know what a professional conference entailed. The advice she gave the participants: “Follow people who have vision and integrity. You will learn a great deal. Even if you don’t understand all aspects of what is happening, follow people with vision.”

Lisa is pleased that her students at Austin College have the opportunities to attend and participate in conferences as undergraduates. “Doing oral presentations in class is valuable, but having to do them in a professional setting provides a level of professional socialization that students won’t get in the classroom,” she said. “This is one of students’ first introductions to the peer review process. Having to present your work in a professional way and get feedback from an audience–feedback that particularly is focused on your development as a professional— is really important.”

The NBGSA offered another important service. “This organization had a place then and now in trying to increase the number of faculty of color,” Lisa said. “For many of us at the inaugural conference, we were first-generation college students, let alone, first-generation graduate school students. We didn’t have the informal networking and mentoring that many other students had experienced, and it was important to have a setting like the conference to compensate for that lack of exposure to higher education.”

Lisa has been a member of the Austin College faculty since 2004. She earned her bachelor’s degree at Harvard and Radcliffe Colleges and a master’s degree and Ph.D. at the University of Michigan, Ann Arbor.

Austin College is a leading national independent liberal arts college located north of Dallas in Sherman, Texas. Founded in 1849, making it the oldest institution of higher education in Texas operating under original charter and name, the College is related by covenant to the Presbyterian Church (USA). Recognized nationally for academic excellence in the areas of international education, pre-professional training, and leadership studies, Austin College is one of 40 schools profiled in Loren Pope’s influential book Colleges That Change Lives.