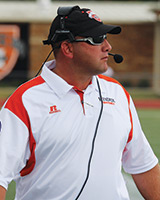 Justin “Buck” Buchanan ’97 never faced a Hendrix College football team when he played for the ’Roos. Hendrix did not have a football program—and would not until 2013 when the former Austin College lineman wore the whistle as the first head coach in 53 years.

“I knew I fit in here at Hendrix, and I think that being an academically oriented DIII coach is in my wheelhouse,” Buck said. In his first season as coach, he had only 52 players. Because everyone got more field time, the coach feels the players got better faster.

“We have gone from last place to the playoffs in three years,” Buck said, “using a simple philosophy: don’t wait to get good. You can’t live soft and play tough, so just do your best when you have the opportunity. That is a direct reflection of how I was coached.”

Read more about our Alumni Coaches!