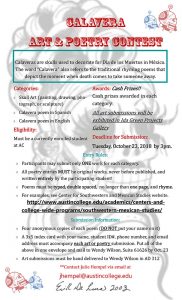 The traditionally decorated sugar or clay skulls or Calaveras for Día de Muertos gradually led to decorative skull and skeleton toys and masks now available in street markets before the holiday. Some examples are found at Some examples are found online. These playful, satirical, and sometimes macabre figures are constantly evolving to reflect contemporary society and aesthetics.

Originating in the 19th century, the literary Calaveras are satirical and burlesque verse compositions which used to be published in periodicals and other street literature at the beginning of November. Because of their critique of both noble and political figures, Calaveras were often censored. Most of them were accompanied with prints and drawing by artists such as José Guadalupe Posada.

The rules of Calavera writing are relatively flexible. The creation is to be composed of verses (preferably of eight syllables each although other meters are acceptable), incorporating a rhyme scheme (abab, aabb, or abba), and strophes or stanzas of four lines each. Most Calaveras are only made of one to three strophes, although longer Calaveras also exist.

In the Calavera, the chosen subject who is usually a politician, a famous figure, or simply a friend or a relative, is presented as dead or close to dying, and meeting with La Muerte (Death) (aka. la calaca, la catrina, la flaca, la huesuda, la blanca, la calva, or in English, the grim reaper, the skinny one, the boney one, the white one, the bald one…etc.). The Calavera is a humoristic take on the traditional epitaph, meant to highlight the personal characteristics of its subject.

Below are some links for descriptions and videos on Calaveras grouped in English and Spanish.