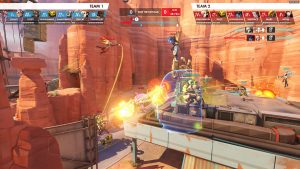 Overwatch is a team-based multiplayer first-person shooter developed and published by Blizzard Entertainment for PlayStation 4, Xbox One, and Windows. The game assigns players into two teams of six, with each player selecting from a roster known as “heroes,” each with a unique style of play whose roles are divided into three general categories that fit their role. Players on a team work together to secure and defend control points on a map or escort a payload across the map in a limited amount of time.

Recent Overwatch games can be viewed on Twitch.