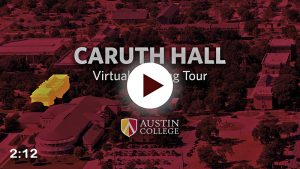 The largest women’s residence hall, Caruth Hall, offers 77 double rooms and three single-occupancy rooms. Caruth was constructed in 1963 and renovated in 1997. A large basement area contains space for meetings, exercise and recreation. Individual rooms have movable furnishings, including beds that can be bunked, desks and study chairs, plus permanently positioned dressers. Due to their size and shape, the cluster rooms on the fourth floor of Caruth have permanently positioned beds, desks, and dressers. Caruth is the only residence hall with regular twin beds, NOT extra-long twin.