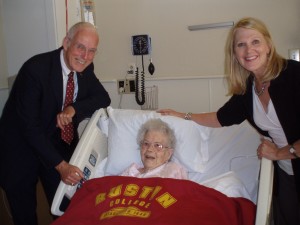 Mary Horton Stribling ’49 celebrated her 100th birthday November 9 with special Austin College friends, at left, Oscar Page, president emeritus, and Cindy Curtis Bean ’75, director of alumni relations, at Texas Health Presbyterian – WNJ in Sherman. Mrs. Stribling, who spent many years teaching in Whitesboro schools, began attending Austin College in the late 1920s, but had to discontinue her classes due to the Great Depression. She completed her degree in 1949.

She has kept journals from her childhood until her early 90s and has written many wonderful stories about her life, including many experiences with Austin College. Her daughter, Mary Ann Stribling Brock, is a 1966 Austin College alumna and earned her master’s degree in education at the College the next year. Also a retired teacher, she plans to type her mother’s hand-written notes and share them with the College community.

Many staff members of the Institutional Advancement division sent birthday greetings and Austin College President Marjorie Hass, though out of town, sent her well wishes for the distinguished alumna. 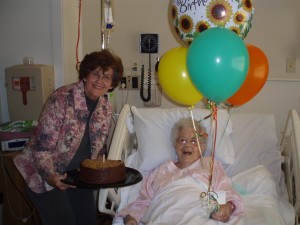