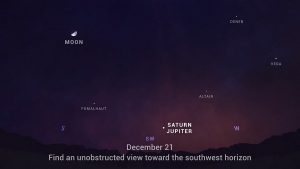 A view of the night sky on December 21. Credits: NASA/JPL-Caltech

Dr. David Baker, director of Adams Observatory at Austin College’s IDEA Center, urges community members to look to the night sky tonight, December 21. “Two stunning celestial alignments will grace the sky this Monday, December 21: the annual winter solstice, and a historic ‘great’ conjunction of Jupiter and Saturn,” he said. “You will be able to observe both of these events in the early evening, starting at sunset and continuing for roughly two hours afterward.”

Sunset has been an important moment for measuring winter solstice throughout the ages. Normally, guests at Austin College’s IDEA Center can view the high noon winter solstice alignment in the center’s Page Atrium through help of the Gnomon hole: a unique solar observatory. This winter, however, a solstice event will not be held at Austin College due to COVID restrictions.

Baker said interested observers can mark the solstice on their own. “On December 21, around 5:20 p.m., stand in a favorite spot and mark the location of the setting Sun on the horizon,” he said. “Then do it again on New Year’s Day, viewing sunset from the exact same spot. You should see a difference.”

GREAT CONJUNCTION OF JUPITER AND SATURN

Roughly 30 minutes after sunset on December 21, a historic “great” conjunction of Jupiter and Saturn will come into view. Baker said to look to the southwest just above the horizon, and notice a brilliant elongated “star” in sky. “This dazzling display is in fact two planets: Jupiter and Saturn will be extremely close to one another in the twilight sky, appearing to join together,” he said. “If skies are clear and calm, you should be able to barely separate the two planets with the naked eye. Such an event is called a conjunction, an apparent close approach of two objects in the night sky. Conjunctions of Jupiter and Saturn occur roughly every 20 years, but occasionally the two planets nudge very close to each other (from our view on Earth) in what is known as a great conjunction. This year’s conjunction will be the best in 800 years!”

Baker explained that even though the conjunction can be seen with the naked eye, binoculars or a small telescope will give an even better view.  With magnification, Jupiter and Saturn may be seen as planets, not just as bright points of light. “For this historic event, both planets will be in the same field of view through the binoculars or telescope (that won’t happen again for at least another 20 years),” Baker said. “Depending on the magnification, you may be able to discern three of Jupiter’s moons and Saturn’s spectacular rings.”

Austin College, a private national liberal arts college located north of Dallas in Sherman, Texas, has earned a reputation for excellence in academic preparation, international study, pre-professional foundations, leadership development, committed faculty, and hands-on, adventurous learning opportunities. One of 40 schools profiled in Loren Pope’s influential book Colleges That Change Lives, Austin College boasts a welcoming community that embraces diversity and individuality, with more than 50 percent of students identifying as persons of color. The residential student body of approximately 1,300 students and more than 100 expert faculty members allow a 12:1 student-faculty ratio and personalized attention. Related by covenant to the Presbyterian Church (USA), Austin College cultivates an inclusive atmosphere that supports students’ faith journeys regardless of religious tradition. The College, founded in 1849, is the oldest institution of higher education in Texas operating under original name and charter.