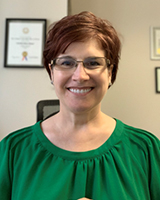 Charlotte graduated Austin College in 1989 with a double major in Political Science and Religion. After a short span of employment in Washington, D.C. with a national trade association, she returned to Texas to attend and graduate from Baylor Law School (thus becoming a “Kangabear”). Charlotte worked in private law practice for a few years and then joined the Opinion Committee of the Office of Attorney General where she writes legal opinions for the Attorney General and speaks on Open Meetings Act issues in the state. In 2013, she became Deputy Chief of the Opinion Committee, a position she still holds. In addition to her new role on the Alumni Board, Charlotte serves as a trustee of Mo Ranch Presbyterian Assembly. She and her husband Mike live in Austin.