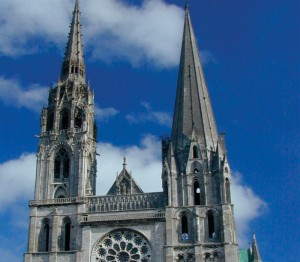 Imagine the sweet strains of the Austin College A Cappella Choir resounding through the heights of Notre Dame Cathedral in Paris. Anyone who happens to be in France’s capital city on May 22 can do more than imagine as the famous landmark is the first venue on the choir’s summer 2011 tour schedule.

Led by choral music director Wayne Crannell, Austin College associate professor of music, the choir embarks on its 12th international tour, continuing through June 2. The choir will sing Sunday mass at Notre Dame–Paris and a concert at Chartres Cathedral, as well as in churches and cathedrals in Lyon, Aix-en-Provence, Angers, and Bordeaux.

Over the past 60 years, the A Cappella Choir has traveled extensively in the United Kingdom, as well as several other cities throughout Europe, and in Australia. The student choir conducts an international tour every four years and an alumni choir tours every four years so that a tour is held every two years.

The tradition of choral music at Austin College extends over 100 years. The A Cappella Choir that will tour France is a 39-voice ensemble performing a wide variety of music, including traditional choral music in Latin, Russian, and English, as well as avant garde works and spirituals. Membership in the choir is by audition, but is not limited to those students completing majors or minors in music.