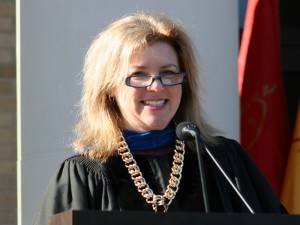 After years of hard work, members Austin College Class of 2011 took their final final exams, and all that was remained before receiving their diplomas was a weekend of ceremony that included many words of encouragement and inspiration, coming from a variety of voices.

The Reverend Bruce Reyes-Chow presented the baccalaureate sermon, “The Excruciating Call to Be Gracious,” on May 14. Reyes-Chow served as the moderator of the 218th General Assembly of the Presbyterian Church (USA) from June 2008 to July 2010 and is the founding pastor of Mission Bay Community Church, a young and growing congregation of the Presbyterian Church (USA) in San Francisco, California.

The pastor told graduates that all have a role to play in life. “We are each sent into the world to grow into who God intends us to become,” he said. “We each seek to discover our calling and the roles we play in the larger story of humanity and the world. We each enter the world with the passion and conviction that we can and will change it, make it better, bring it closer to how God wants it to be.”

“Fair or not, your generation is being handed a world in desperate need of a new way of being the world,” Reyes-Chow told students. “You carry, in a way different than any of us before, God’s hopes, dreams, and intentions. The world needs people who are serious about living in a way that changes the world so that we all can more fully live into the hopes that God has for humanity. Will you hear and answer this call to be that faithful generation?”

Austin College President Marjorie Hass welcomed graduates and their friends and families to Commencement exercises the next morning, offering the first good thoughts of the ceremony. “My prayer for each of you is that you will take what you have earned here, and what you have been freely given, and you will transform it into a blessing for the world,” she told them.

Words of motivation continued with the Commencement address by business leader and philanthropist Drayton McLane, Jr.

McLane, chairman of the McLane Group and CEO of the Houston Astros Baseball Club (he announced the club’s sale later that day), gave students several pieces of advice, but offered four ideas he said would make a difference in their lives: dare to dream; operate out of imagination not memory, leaving failures behind; seek adversity—the lines are shorter; and walk with elephants, “those who shake things up.”

Lewis Musoke of Nairobi, Kenya, spoke at the Commencement ceremony on behalf of the Class of 2011, selected by his classmates for the honor. A member of the Posey Leadership Institute, Lewis served as president of the Student International Organization and a member of AC Cares. He also is a performer with the Austin College A Cappella Choir and the Quartette. Lewis, who completed a major in biology and a minor in French cum laude, has received the International Peace Scholarship from St. George’s University School of Medicine in Grenada of the West Indies and will begin his medical degree in the fall.

“Today marks for us the pinnacle of pride, the end of an era, the beginning of a new adventure, the hope for a future, or the continuation of something,” Lewis told his classmates. “Whatever this day means to you, cherish it for it is truly a milestone worth remembering. This memento that we will walk away with today is more than just a statement of education but a testament of perseverance, sacrifice, and most of all memories of a truly invaluable and unforgettable experience.”

The weekend included many honors in addition to the awarding of diplomas to 17 Master of Arts in Teaching students and nearly 270 undergraduate students. At the Commencement ceremony each year, the faculty selects for special recognition two outstanding scholars in the graduating class. The awards are made, with no distinction between them, on the basis of the student’s entire academic record as reflected on the transcript, the balance in course distribution, cumulative grade point average, and credits earned. The two students selected become the recipients of the J.C. Kidd and J.M. Robinson Memorial Scholarship Medals. The Kidd Medal is made possible through the generous gift of a Houston resident in memory of his friend J.C. Kidd and was first presented in 1940.The Robinson Medal, first presented in 1935, is given in memory of Mr. and Mrs. J. M. Robinson of McKinney, Texas.

This year the Kidd Medal was presented to Matthew Varvir of Carrollton, Texas, and the Robinson Medal was awarded to Katherine Wilshusen of Dallas, Texas.

In addition, 17 students completed Departmental Honors. These students were invited by faculty, based upon excellent research potential and exceptional performance, to complete a senior thesis. Each student defends the thesis in an oral examination administered by the student’s thesis committee.

Once diplomas were in hand and the graduates were ready to move into the world, the day’s final formal words of encouragement came from President Hass. “I challenge each member of the Class of 2011 to keep this place and its people close to your heart,” she said. “You are bound to us—and we to you—by strong ties of commitment to knowledge in the service of justice, to community that celebrates differences, and to the blending of a local and global vision. Do well. Do good. And do keep in touch.”