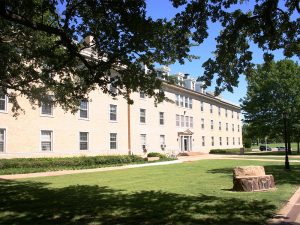 Clyce Hall offers 64 double rooms and two single occupancy rooms for male and female students. Depending on the student population, genders are separated by floors or by wings.

The building has four floors and a basement. An elevator is available. Each room includes movable furnishing of dressers, beds that can be bunked, nightstands, and study chairs, plus permanently positioned desks. The first floor has a large lobby area, a small kitchen, a television room, and a area coordinator’s apartment. The public areas were originally furnished by a gift from Louis Calder of New York and the lobby was named Calder Lounge in his honor.

Free washer and dryer facilities for residents are available on the fourth floor.