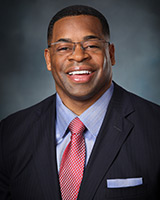 The 13th annual Grayson County Martin Luther King Jr. Day Celebration Breakfast will be held Monday, January 16, at 7:15 a.m. in Mabee Hall of the Robert J. and Mary Wright Campus Center at Austin College. The cost is $15 per person, payable at the door, and admission is free for the faculty and students of Austin College and Grayson College.

This year’s keynote speaker is Dr. George Koonce, Super Bowl XXXI Champion, former starting linebacker for the Green Bay Packers, and current Senior Vice President of University Relations at Marian University in Wisconsin. Koonce is known as the “Doctor of Defense” because he is one of only two men who not only played for the Packers but also earned a doctoral degree. He began his college career at Chowan College in North Carolina. Before graduating in 1989, he was named Coastal Conference Defensive Player of the Year. After a year stint in the World League of American Football, Koonce was drafted by the Green Bay Packers in 1992. He was a starter for eight years.

He continued his education by earning his bachelor’s degree at New York University in 1999, his master’s in Sports Management from East Carolina in 2006, and his doctorate from Marquette University in 2012. Koonce has served in a variety of athletic administrative positions at Marquette University (Wisconsin), Wisconsin-Milwaukee, East Carolina University, as well as for the Green Bay Packers. His dissertation, “Role Transition of National Football League Player: Using the Grounded Theory,” brought awareness to the challenges that NFL retirees face. In 2014 he co-authored Is There Life After Football?: Surviving the NFL with James A. Holstein and Richard S. Jones.

The annual parade celebrating the life of Martin Luther King Jr. will be held Saturday, January 14, at noon. All churches, civic and social groups, and members of the public are welcome. The parade route begins at 400 S. Travis Street and will progress eastward on Brockett. A service will follow in Mabee Hall in the Wright Campus Center of Austin College at 1301 E. Brockett. For parade participation information contact Eric Ross at 903.818.8607; for program information contact Bishop Charles H. Brown Sr. at 903.818.4728.