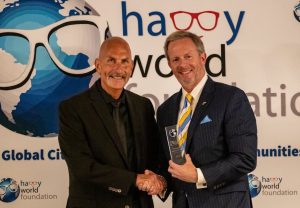 “At Austin College, global citizenship is built into our DNA,” President O’Day said in accepting the honor. “Thank you for this recognition. We join with you in your mission to develop global citizens. Through the Compass Curriculum, all of our students engage in new perspectives through coursework in global diversity and demonstrate competency in a language other than English to be prepared to participate in a diverse and global society.”

He spoke of Austin College’s new courses in modern languages, internship opportunities outside the U.S., a new partnership in Ecuador, and the College’s residential foreign language program. In Jordan Family Language House, native speakers and 48 current students live together each year to enhance language and cultural learning in Chinese, French, German, Japanese, and Spanish, often in preparation for a semester abroad program.

“Over two-thirds of our recent graduates had at least one international study experience—many had more than one,” O’Day said. “These experiences provide connections beyond the textbook. History is alive when crouching in a bunker or walking a battlefield. Understanding of environmental issues becomes broader and more immediate hiking through rain forests or across tundra. Any study of language and culture is deepened through first-hand experience and immersion.” 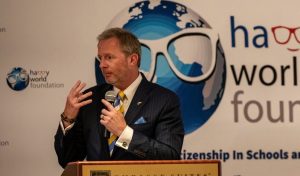 President O’Day told those gathered that Austin College students have studied in a list of countries from Argentina to Zambia, too long to name. “This past summer alone,” he said, “we had students studying and working in Greenland, Paraguay, Ecuador, Honduras, Argentina, and Austria. They served in cities, in remote rural areas, and everywhere in between. They had the opportunity to apply some of their skills first-hand in clinics, in schools, and in retirement homes, but perhaps more importantly they actually experienced another culture and forged international bonds of friendship and understanding.”

Results of the international experiences are far from temporary, President O’Day said. “We know that these experiences make a difference to our alumni. They go on to do fantastic work—and win Fulbright awards. Austin College has the most Fulbright recipients per capita of any college in Texas, and in the past seven years, six of those Austin College students have been German majors.” 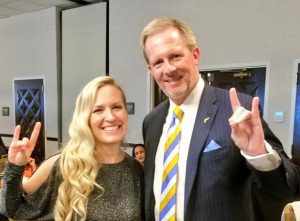 Austin College alumnae Amy Anderton, Class of 1986, and Kimberly Faith Hall Church, Class of 2003, attended the gala and understand well the value of the Austin College global focus. “All we do at Austin College comes back to being a global citizen,” Hall said. “It is sewn into the curriculum, the calendar (January Term), the bonds we make with staff and fellow students, and the communities we impact around the world. “

The award nomination came from Anderton, who works with the foundation. “Because of my degree in German, my study abroad, the Language House I lived in, and the service projects I took part in while at Austin College, the trajectory of my life has put me in the position of Director of Foreign Languages in Dallas ISD and the Director of Operations at Happy World Foundation,” she wrote to President O’Day.

Keynote speaker for the gala was CNN Hero Sister Rosemary Nyirumbe, who prefers the introduction of “Sister of the Sacred Heart of Jesus Congregation.” She is honored around the globe for more than 40 years of life-saving ministry to children, young people, and women in war-ravaged Uganda. She has been named one of TIME magazine’s “100 Most Influential People in the World” and received the United Nations Impact Award. Ramu Damodaran, chief of the United Nations Academic Impact Initiative also took part in the evening. 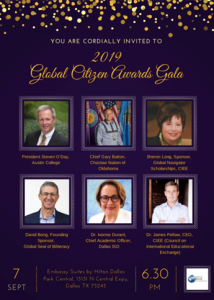 Founded in 2013, the Happy World Foundation promotes Akash and Anand Happy Patel’s vision for a happy and peaceful world by bringing global citizens to classrooms worldwide to impart anti-bias multicultural and multilingual education. The foundation continues after the 2018 death of Anand Happy Patel under the director of his twin brother, educator Akash Patel, who teaches at a Title 1 ACE (Accelerating Campus Excellence low socioeconomic middle school in Dallas and previously taught at a similar school in Oklahoma. In his first year of teaching, Patel was named the 2015 Multicultural Teacher of the Year by the State Department of Education and the Multicultural Education Institute for promoting global citizenship in his classroom. In 2017, Patel was selected from among more than 30,000 nominees as one of the top 50 teachers around the world and shortlisted as a finalist for the $1 million Varkey Foundation’s Global Teacher Prize, awarded annually to one teacher who has made an outstanding contribution to the profession. The 50 teachers traveled to Dubai where they were inducted as Varkey Teacher Ambassadors.

Patel has connected all of his classrooms with people and professionals worldwide using virtual platforms. What began with his friends on social media platforms has grown to more than 1,000 volunteers from over 150 countries who are members of his Global Connect database at the Happy World Foundation. He also founded the World Experiences Foundation, a nonprofit that promotes exchange by creating opportunities for connectivity between international students and professionals from around the world and local schools, businesses, and public forums.

Patel frequently speaks at local and national conferences about his classroom experience. He has also trained over 5,000 teachers to use the Global Connect database and other multicultural programs. Today, thousands of American children travel to countries worldwide through Happy World Foundation’s global education programs.