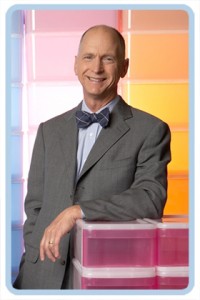 Garrett Boone, co-founder of The Container Store, credits his entrepreneurial success to three early goals: operate his own business, create the perfect retail company, and explore the concept.

Those goals, Boone said, helped him build The Container Store from one small location at Preston Road and Forest Lane in north Dallas in 1978 to today’s nearly three-quarter-billion-dollar company.

Boone, who is now chairman emeritus for the company, was the honored guest and lecturer at the Williams Executive-in-Residence series held at Austin College October 13. His talk, “An Entrepreneur’s Journey,” traced his path from high school to the Container Store’s founding and beyond.

It wasn’t a typical tale. In high school, “if I’d listed 100 things I might do, retailing would not be on the list. I worked in retail one summer – and it was the worst experience ever,” Boone said with a laugh.

Though he originally had intentions of becoming an architect—an interest that stemmed from writing a paper on the work of Frank Lloyd Wright—Boone eventually graduated from Rice University with a degree in European History. But even that was not straightforward; he dropped out of school for six months in his junior year to spend time doing social work in New York City. He also spent two years hitchhiking across the United States.

During that break from college, “I learned so much about myself,” he said. “I learned that I felt totally free. I knew my ability to get a ride depended on my ability to make contact with someone driving by at 70 miles per hour. And I was really good at it.”

He returned to college and went on to earn his master’s degree in history with plans to pursue a teaching career. Yet, that path did not seem a good fit, and Boone took a job managing the paint department at a Montgomery Ward store – with the discovery that he liked retailing after all. He moved from selling paint to management at Storehouse, a lifestyle furniture retailer, and with the encouragement of his wife, took the big step of leaving his job to devote full-time to developing his own retail concept.

For two years, Boone and two business partners, Kip Tindell and John Mullen, explored ideas for a store offering handmade furniture. In early 1978, just as they were about to give up, inspiration struck. Boone was driving back from attending one of Dallas’s first home improvement shows when he had the vision to build a store focusing on unique storage solutions for the home – an entirely new category of retail products.

“We finally had a concept after two and a half years of wandering the wilderness,” Boone said.

The Container Store was launched in July 1978  with only the owners’ personal capital investment of $35,000, and while the partners didn’t draw a salary for six months, the store was immediately profitable.

Boone built on that initial success by focusing on exceptional customer service, by staying true to the store’s concept, hiring great people, and committing to building a great corporate culture. The Container Store has, in fact, been named a Great Place to Work by Forbes magazine for 12 consecutive years.

“Despite all the wanderings and misdirections during my college years, I think I ended up in exactly the right place,” Boone said.

Boone’s lecture was preceded by a panel of alumni professionals offering advice to students interested in careers within economics and business administration. Speakers included: Brandon Brown ’09, Avelo Mortgage; Chris Pendergrass ’09, Presco; Geoff Wescott ’08, Archon Group; and Steve Sullivan ’95, Goldman Sachs. The panel was moderated by Wes Moffett’82, CEO of Avelo Mortgage and a member of the Austin College Board of Trustees.

The Williams Executive-in-Residence Series at Austin College was established in 2007 by Todd Williams ‘82.