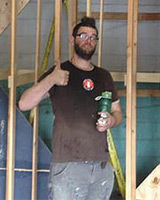 Dan Pucul was inducted into Alpha Psi Omega Nu Kappa chapter his sophomore year at Austin College and graduated in 2004 with degrees in Communication Arts and Psychology. While spending a year in Los Angeles,  Dan acted in several productions at Zombie Joe’s Underground Playhouse.  Dan went on to get an MA in drama from Texas Woman’s University where he served as the Graduate Shop Foreman Assistant for two years. From there, he found employment at Theatre Three in Dallas as their technical director– a position he retained for four years. Dan currently works at Austin College as Technical Director.