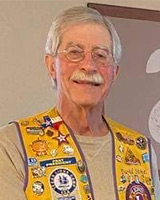 I was born (May 5, 1948) David Graham Stone in Old San Juan, Puerto Rico, and spent the first six years of my life as an Army brat on the East Coast. Grew up in La Jolla, California, and was graduated from La Jolla High School, Class of 1966. Spent an (academically) unsuccessful short period at the University of California at Santa Barbara, and asked not to return in early 1967.

I then enlisted in the United States Army in February 1968, serving three years (including eleven months in Viet Nam as a Staff Sergeant). While in Viet Nam I received the Bronze Star Medal for Meritorious Service Against Hostile Forces. In February 1971, I relocated to Sherman, Texas, to ultimately marry my wife, Carleen Wilson, of fifty years, and enter Austin College on the G. I. Bill, September 1971. I was graduated with honors in January 1975, with a degree in Business Administration and a minor in Economics. I then spent two years with the Texoma Regional Planning Commission as an economics planner. February 1, 1977, I joined Dallas-based Eppler, Guerin & Turner, Inc., a predecessor to Wells Fargo Advisors, in their Sherman, Texas office. February 1, 2018, I sold my interest in the business to my partner, turned out the lights, shut the door, and began the present chapter in my life as a Life-Long Learner. Carleen and I have two children, Elizabeth Dobbs-Sloan and Alex Stone. Elizabeth was graduated from Texas Tech and is a bilingual, high school Spanish teacher. Alex was graduated from SMU and is a fashion designer in Dallas. We have two grandchildren; Ryan Elizabeth Dobbs, and Creed Harrison Dobbs. Ryan is entering UT this month in their Bio-Chemistry program, and Creed begins his junior year at Sherman High School.