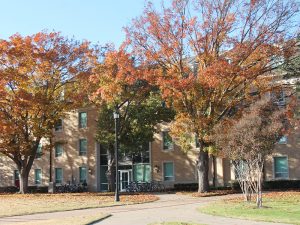 Dean Hall is the largest residence hall on campus with 116 double rooms and seven single rooms, housing men and women. The floors are typically divided, with men in one wing and women in the other. Furnishings include permanently positioned desks and dressers along with movable study chairs, and beds that can be bunked. Individual rooms are carpeted. The residence hall was built in 1964-1965.