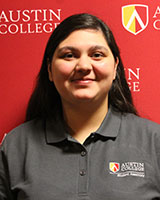 Junior Nicole DeLuna of San Antonio, Texas, has been elected student body president at Austin College, leading Student Assembly for a second year-long term beginning January 2021. She began her new role with the traditional lighting of the campus Christmas tree at the Service of Lessons and Carols, streamed December 3 on Facebook and YouTube.

Majoring in anthropology and economics, Nicole has also been involved in many campus organizations on campus. She became involved with Thinking Green environmental awareness and action group, Los Amigos student group, and Student Assembly as a freshman. As a sophomore, she was part of the TEDxAustinCollege planning team and continued her involvement with Thinking Green and Student Assembly. She also become an Admissions tour guide and does work-study on campus. “Although I have had a range of involvements on campus, I have dedicated most of my time toward Student Assembly,” Nicole said

Elected as president of Student Assembly as a sophomore at the beginning of 2020, Nicole soon found herself having to make the hard decision of postponing activities of Student Assembly, as nearly all students were remote as of spring break, taking synchronous classes through Zoom and similar platforms for the remainder of Spring Term 2020.

Nicole still had duties and responsibilities as president however. She remained involved with the Inclusion and Diversity Committee and its work to represent the needs of the entire campus community. Through the summer, she worked closely with a faculty member who was part of the Ida Green Communication Center renovation team, to help design and purchase new outdoor seating, funded by Student Assembly, for the area near the Margaret Jonsson Fountain and Plaza.

In fall 2020, with many students back on campus, Student Assembly hosted meetings virtually and held two in-person events to engage with the student body. Office hours were a hybrid of virtual and in person sessions. Though Nicole said things were a little difficult, Student Assembly still worked on a number of resolutions including energy meters, accessibility ramps, and an outdoor projector screen. The members also worked with Austin College Police to locate areas on campus that need brighter lighting to provide better safety for students.

Mid-semester this fall, Nicole realized she hadn’t done all she hoped to accomplish and made the decision to run for a second term as president. “My platform was focused on the same three ideas as my first run: inclusion and diversity, sustainability, and safety. Since winning re-election, I am making plans to be sure our new assembly receives training on inclusion and diversity to represent our student body the best way possible. I plan to use my time to engage with various students of different identities and various organizations on campus to hear their needs to determine Student Assembly’s role in serving them,” she said.

Nicole knows the importance of meeting with her constituents to reach the goals of Student Assembly. “As we continue to communicate with the student body, hopefully our projects and Student Assembly’s involvements on campus will grow,” she said. “Now that I have gotten over the learning curve of my first term, I am excited to see what we will accomplish in my second term. I hope to continue networking with all students, staff, and faculty to strengthen the Austin College community.”