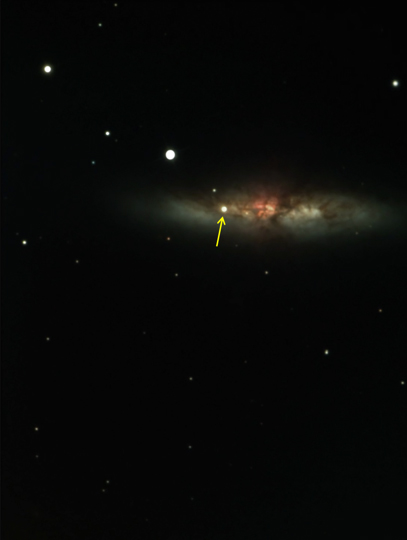 Austin College students seized a stellar opportunity last week, capturing vivid images of a newly discovered supernova from Adams Observatory in the IDEA Center on campus. Senior physics students Aryn Hays and John Donor, with faculty Dr. David Baker and Dr. Peter Hyland, were able to secure fantastic views of deep space, thanks to one of the largest research telescopes in north Texas. The new science center and observatory opened for Fall Term 2013.

The supernova, initially identified by undergraduate students at the University of London in January, is located in the galaxy M82, also known as the “Cigar Galaxy.” Baker said a supernova is an exploding white dwarf star caused by runaway nuclear fusion—much like a nuclear bomb. A supernova can radiate as much energy in its short lifetime of a few weeks as the Sun during its entire 12-billion-year existence, he said. The supernova is not visible now with the naked eye.

Taking the images was a complicated project, according to Donor. “Astrophotography cameras are highly precise and only take an image in one color,” he explained. “We apply red, blue, green, and luminance filters to the camera and take images with each of these filters, combining them after the fact.” He said that the entire process took some time. “We ended up taking at least an hour’s worth of images with each filter over the course of a few days,” he said. “We had to spend almost five hours to get one final image.”

Astrophotography, according to the students, is a meticulous art. “We were taking a single image for seven minutes and the sky doesn’t stay in the same place,” said Donor. “The telescope has to follow, perfectly, at the same rate of movement.”

For the students, capturing the images was a race against the clock. “We used five late nights in a row,” Hays said. A large part of the photography also was at the mercy of the weather. “The atmosphere could be very turbulent depending upon the time of night, the amount of water in the atmosphere, and the temperature,” said Donor. “There were some nights when we just couldn’t get good pictures.”

Despite restrictions, the team succeeded in producing images of superior quality, adding to the photo archive of this unique event. Hays stated that she and Donor were inspired by the success of the students in London. “It was pretty good motivation for us,” she said. “If they could do it, we could do it.”