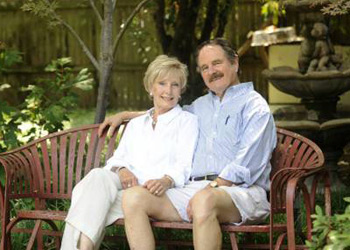 The Dallas Morning News on Sunday, August 5, included a story of a couple well known to many in the Austin College community—alumni Robert ’60  and Honey Altman Minshew ’63. The two became friends at Austin College … and celebrated their 49th anniversary in July.

From the start, Robert Minshew and Honey Altman were the best of friends.

Robert was a senior at Austin College in Sherman in 1959 when he met freshman Honey. They often went on double dates, but as other people’s dates. That changed when Honey’s boyfriend graduated, joined the Marines, and moved to California.

“He got married, and I kind of felt sorry for her,” says Robert, who went on to law school at Southern Methodist University. “I thought I’d help her out a little bit and kind of console her.”

During the next year, Robert was Honey’s regular weekend date while she dated other guys at Austin College. Then that summer, when Honey was a camp counselor in Tennessee and Robert stayed in Dallas for work and summer school, they started writing letters.

“We kind of fell in love through the mail,” he says. “By the time she came back, I was real serious about dating her.”

By late 1962, Robert had an engagement ring and plans to propose at Christmas. But first, he called his mother in Alabama to tell her. Honey’s last name rang a bell for his mom. She soon realized that Honey’s dad, who had been a doctor in Sherman years before, had delivered Robert in 1938. The next time Robert saw Honey’s dad, he asked him if he had ever delivered a baby. Yes, he said, one in Sherman and also his daughter in Galveston.

“What are the odds of that happening?” says Robert, now 74. “He delivered two babies total.”

Taking that as even more of a sign, Robert proposed — at Honey’s grandmother’s house with a diamond that wasn’t very big because of his student budget.

Honey, now 71, remembers the gesture as sweet but says “you had to have a magnifying glass” to see the ring.

“I just loved it and felt like it was the most beautiful thing I’d ever seen,” she says. “I was sure. There wasn’t any doubt about the deal.”

Robert and Honey were married July 13, 1963, at Kessler Park United Methodist Church. Soon after, they moved to Quantico, Virginia, for a year and then Hawaii for three years while he served in the Marine Corps and Honey taught school. (She finished her elementary education degree that spring.)

Son Marshall was born in 1965. Then they moved back to Sherman in 1967 so that Robert could practice law. Daughter Monica was born the next year.

As they raised their kids, Robert and Honey also found a passion for restoring old buildings around Sherman, including their home of 38 years that was built in 1898. They also had a hand in Sherman’s historic Kelly Square. Just recently, they moved into a Charles Dilbeck home designed in 1935.

Neither Honey nor Robert has plans to retire anytime soon. Honey’s recent battle with uterine cancer only made their bond stronger. Now facing the early stages of breast cancer, Honey knows Robert will once again be right by her side.

“He was always my best friend,” she says. “I probably always loved him. He’s a great guy. … And he’s a good dancer. We still love to dance.”