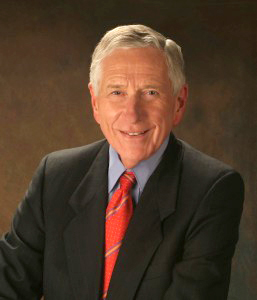 Business leader and philanthropist Drayton McLane, Jr., chairman of the McLane Group and CEO of the Houston Astros Baseball Club, has been selected to present the Austin College Commencement address for the class of 2011. The commencement exercises will be held Sunday, May 15, at 8:30 a.m. on the Clyde L. Hall Graduation Court on the campus.

McLane, who has made it his goal to base his endeavors on moral ethics and Christian values, has received many awards and honors for his professional accomplishments as well as his service to a variety of community and educational organizations, will receive an honorary doctorate during the Austin College ceremony.

Austin College president Marjorie Hass said that McLane’s life exemplifies a passionate mix of career success, principle, and dedicated service to community and charitable organizations. “His writing and speaking on the topic of leadership are compelling,” she added.

More than 315 students will receive diplomas in May, including 17 Master of Arts in Teaching students. Seniors and their parents will gather the previous evening for a Baccalaureate address by Rev. Bruce Reyes Chow, moderator of the 218th General Assembly of the Presbyterian Church (USA), serving from June 2008 to July 2010.

McLane, Jr., was born and raised in Cameron, Texas, where his father, Drayton McLane, Sr., owned a wholesale grocery distribution center. Formation of McLane’s work ethic began at age nine when he went to work for his father’s business, a family-owned entity that had been established by his grandfather, Robert McLane, in 1894.

After earning his business degree at Baylor University in 1958 and a master’s degree in business at Michigan State University in 1959, McLane, Jr., returned to work at his father’s company, taking a position loading trucks on the night shift. A few years later he moved into management as vice president of purchasing. He served 14 years as general manager of operations, before becoming president and CEO of McLane Company in 1978 and chairman in 1992.

During his tenure, he propelled the McLane Company into a $19 billion dollar company, achieving an average growth rate of 30 percent per year. Following the McLane Company’s merger with Wal-Mart, Inc. in 1990, he became vice chairman of Wal-Mart while maintaining his positions at the McLane Company. After playing key roles in each of these companies’ growth and productivity, he resigned in order to devote more time to the McLane Group, a parent company consisting of family-owned companies operating throughout the world, and to the Houston Astros, which he purchased in 1993.

McLane previously served as chair of the board of the Children’s Miracle Network; a member of the Texas State Board of Mental Health and Mental Retardation; and chair of the Temple (Texas) Chamber of Commerce, United Way, and the United Way Campaign. He was a trustee of Baylor University and a member of Baylor’s Board of Regents, also serving the Baylor University Development Council as president.

McLane has been honored extensively for his professional accomplishments, service to his community, and generosity in support of education and other causes. He was named a regent emeritus from Baylor University in 2010, previously serving as the chair of that board. Additionally, McLane received the Woodrow Wilson Award for Public Service from the Woodrow Wilson International Center for Scholars in 2008. The award is given to executives who, by their examples and business practices, have shown deep concern for the common good beyond the bottom line.

Additionally, he has been honored with Baylor University’s Distinguished Alumnus Award and W. R. White Meritorious Service Award. He was named Master Entrepreneur o the Year by the Texas A&M University College of Business Administration and Graduate School of Business; an Arthur Young/VENTURE Magazine Entrepreneur of the Year; and a Texas Business Hall of Fame Foundation honoree. Michigan State University recognized him with an honorary doctoral degree.

McLane and his wife, Elizabeth, live in Temple, Texas, where they are active members of First Baptist Church of Temple. He and his wife have two adult sons and five grandchildren.