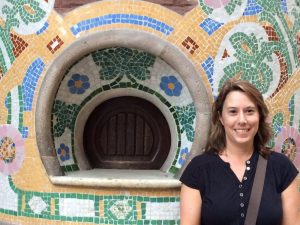 Dr. Elena Olivé, Austin College associate professor of Spanish, is one of 10 recipients around the world of the “Josep Maria Batista i Roca – Memorial Enric Garriga Trullols” Award from the Institut de Projecció Exterior de la Cultura Catalana (The Institute of Foreign Projection of Catalan Culture].

The prize has been awarded for 32 consecutive years to Catalan and Catalan-born residents outside of Catalonia who have distinguished themselves in maintaining the Catalan presence in the world and in promoting Catalan culture abroad. Enric Garriga Trullols, for whom the award is named, was an activist for Catalan independence. In the mid-1970s, Trullois co-founded the IPECC and later served as the institute’s president until his death in 2011.

An award presentation in Barcelona is scheduled for this fall; whether it will be held in person or through virtual channels is not yet determined.

While Olivé knew she had been nominated for the award, she was very surprised to learn that she was a recipient of the international award, particularly being the only awardee in the United States.

Catalonia is one of 17 regions in Spain; located in northeast Spain, the Catalan capital is Barcelona. Olivé explained that the people of Catalonia speak their own language, have their own culture, traditions, and cuisine. She added a class to the Austin College curriculum for January Term that covered various cultures of Spain and also led JanTerm travel courses to Barcelona to study the art and architecture of the city. She also added a course that examined the Catalonian movement of recent years to separate from Spain. The class conducted a semester-long research project and held a debate on the two sides of the ­independence/national state issue, Olivé said. Before COVID-19 restrictions, Olivé had intended to bring a performance group from Catalonia to Austin College to present a cultural program through the American Institute of Catalan Studies (AICS).

Olivé also is a member of the board of the AICS, which works to make Catalonia known in the U.S. and to expose Americans to the historical, political, cultural, artistic, and economic aspects that characterize Catalonia as a nation, and to promote the educational studies of the scientific, literary, socio-economic, cultural, and political institutions of Catalonia.

“I’m helping on an academic level to foster the study of Catalan history, culture, and society and to stimulate the understanding of important political occurrences that shape the way democracy functions,” Olivé said. “In my Catalan Culture class, students study Catalan history leading up to key current events, which then allows them to reflect upon and perhaps better understand their own socio-cultural realities.”

“I’m so grateful to the Institut de Projecció Exterior de la Cultura Catalana for recognizing me as a leader in promoting Catalan culture,” Olivé said. “I also offer a special thanks to Hellena Cardus of the American Institute of Catalan Studies (AICS) for her amazing support and for inviting me to be on the leadership team for the institute.  I’m excited about future projects and collaborations as our work to propagate Catalan culture evolves!”

Olivé has been a member of the Austin College faculty since 2001 and was granted tenure in 2008. She earned her bachelor’s degree at Texas A&M University, a master’s degree at New York University, and Ph.D. at the University of Kansas.