For most, the moment likely will pass unnoticed. Austin College physicist David Baker is preparing once again to demonstrate the workings of the unique Gnomon Hole in the roof of the College’s IDEA Center. The Gnomon Hole creates a solar observatory that Baker says is the only one of its kind on a U.S. college campus. 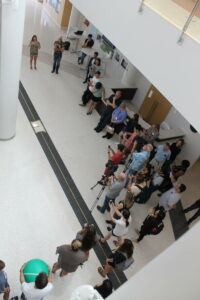 To mark the event, the public is invited to join faculty, staff, and students, at no charge, for the Equinox event from 1 p.m. to 1:20 in the Oscar C. Page Atrium of the IDEA Center. The IDEA Center is located on the Austin College campus at 1108 E. Richards Street. Sunlight is required for the event so rain or overcast conditions will cancel the event.

The IDEA Center itself serves as a large astronomical observatory that displays the movement of the Sun across the building’s atrium. Sunlight passes through the Gnomon Hole in the roof to cast an image on the atrium floor. The atrium was constructed so that, at solar noon, the sunbeams of the autumn and spring equinoxes fall on the Chinese symbol for the Sun in recognition of the many Asian contributions to the knowledge of the universe.

“Watching the sunbeam march across the floor of the Page Atrium and arrive at the equinox marker is magical,” said Baker. “The magic moment occurs at ‘solar noon,’ 1:19 p.m. CDT. The solar observatory at Austin College does this in a unique way. It is worth seeing.”

Baker will provide a historical and scientific overview during the event. A Gnomon Hole is an ancient device originally used to compute time.