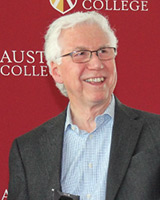 The Austin College Board of Trustees has named Dr. Michael Imhoff to serve as interim president of the College as of July 1. Former president Dr. Marjorie Hass left in late June to assume the presidency of Rhodes College in Tennessee effective July 1. That move was announced last December and the Austin College Board of Trustees immediately set in motion the process to determine the next president of the College—only the 16th in its 168-year history.

Imhoff served Austin College as vice president for Academic Affairs from 2000 until his retirement in 2013. He already knew the College well, having become a faculty member in the Department of Chemistry in 1970. He was named the Rupert B. Lowe Chair in Chemistry in 1995, and received the College’s Excellence in Teaching Award in 1997. His career in the classroom, which included courses in general chemistry and organic chemistry, involved research opportunities for many students. During his teaching career, he served as department chair and dean of the Sciences, as well as the first director of the Austin College Center for Environmental Studies.

“We are confident that Dr. Imhoff’s long-tenured experience and knowledge of Austin College and its constituencies, as well as his leadership and great wisdom, will bring a sense of steadiness and positive direction to this transition period,” said Scott Austin, Austin College 1983 graduate, member of the Board of Trustees, and chair of the Search Committee for the 16th President. “We are grateful to Mike for his love of Austin College and his willingness to serve.”

“Austin College is very special to me and I am honored to be asked to serve as the interim president during this transition,” Imhoff said. “I look forward to working with my many friends and colleagues as Austin College continues the tradition of offering the very finest liberal arts education.”

Imhoff was selected as the College’s Homer P. Rainey Award recipient in 2013. Announcing the award, Tim Millerick, vice president for Student Affairs, said that Mike brought a combination of administrative skill, calm demeanor, and personal integrity to his role as vice president. “The benefit to the College was enormous and his commitment to liberal arts education is deep,” Millerick said. “As a faculty member in the Sciences, he put his time where his beliefs were and made major contributions to the overall academic program of the College. He has what is regarded as the single most important intellectual quality: curiosity. This led him to climb over the walls of his discipline and made him an outstanding teacher and administrator.”

Upon retirement in May 2013, after 43 years of service to the College, Imhoff was granted status as professor emeritus of chemistry and vice president emeritus of Academic Affairs. He had been instrumental in the planning and design of the College’s IDEA Center, and its opening in Fall Term 2013 was a fitting capstone to Imhoff’s esteemed career in academics.

The Search for the 16th President

With the efforts of the nationally recognized search firm of Wheless Partners, selected to assist the board in identifying and recruiting qualified candidates for the new president, the search committee received a vetted pool of aspirants in May. The search committee since has narrowed those to 10 candidates, completed video interviews to narrow the field to five, and now begins personal interviews with the finalists. “Things are happening; we are moving forward, and I feel very confident about the future president of Austin College,” Austin said.

Imhoff added, “There is great anticipation on the Austin College campus as we look forward to the arrival of new president. It is indeed a rare event. In my 43-year career at the college I have engaged in only three transitions of presidential leadership.”