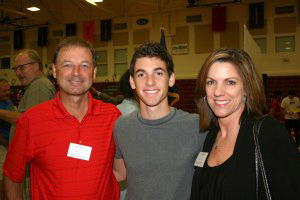 Ben, center, with his parents Brad and Kim Sater, during Orientation events at Austin College in August.

Austin College freshman Ben Sater has received lots of attention in recent months for his success, since age 11, in raising more than $1 million for Texas Scottish Rite Hospital in Dallas.

Now, he has been included in November’s Golf Magazine “40 Under 40” highlight—the means for his fundraising was youth golf tournaments.

The magazine article describes the 40 individuals on the list as “the game’s up-and-coming generation of influencers, trendsetters, and newsmakers, an eclectic mix of talent worth watching today and for many years to come.”