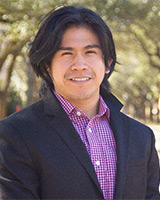 Bio: George S. Melchor, Jr. graduated from Austin College in January 2017, with a B.A. in Biology and a minor in Neuroscience. He originally transferred to Austin College from Southwest Texas Junior College in Uvalde, Texas, in the pursuit of a robust education in the biological sciences. While attending, in-course research has allowed him to study the role of PA28γ, an upregulated proteasome activator across many cancers, in cancer development under Dr. Lance F. Barton. He also researched the effect of supplemental cognitive enhancers on a series of behavioral memory performance tasks in Long-Evans rats under Dr. Renee Countryman. Additionally, he served as a teaching assistant for multiple anatomy and physiology labs, sparking his interest in understanding neurological development. These experiences ultimately led to a student researcher position in Dr. Barton’s lab the summer of 2016, in which George investigated the connection between PA28γ and the p53 –signaling pathway in cancerous cell transformation. He continued this research into the academic semester and presented at the 2016 American Society for Cell Biology (ASCB) Annual Meeting. George plans on attending graduate school to delve deeper into the neurosciences, particularly in the study of neurodegenerative disease.

Research: Attending the 2016 American Society for Cell Biology (ASCB) Annual Meeting was my first experience at a conference centered in the sciences. Before arriving in San Francisco for the meeting, I was already excited for the chance to better understand what it means to be a scientist. I had previously been involved in research, and had gotten a good sense of what it means to actively participate in the sciences, but have had little exposure to the field outside of Austin College. I attended keynotes and several talks in which I gained a vast amount of knowledge from those making great strides in the field. Moreover, through those talks and the interactions I made with other students, professors, and researchers I began to understand the vast amount of roles one could take in the scientific world. I also had the opportunity to grow from some special sessions offered by the ASCB Minorities Affairs Committee (MAC). I had applied for and was awarded a travel stipend by the MAC to attend the meeting, and was given the chance to attend a mentoring keynote and a networking session. These sessions provided me insight into graduate research, allowed me the opportunity to ask graduate students of their experience, and gain a better sense of what the scientific world entails. Furthermore, my lab team and I were given the chance to present our research in two poster sessions at the meeting, one of which served as a poster competition. I was tasked with presenting our research to the judges (I had not ever presented to others outside of Austin College) and although was nervous and unsure of my abilities, I was awarded special recognition for our lab’s efforts. That opportunity was an incredible experience and surely gave me confidence as I make my transition in my scientific journey to graduate school. The ASCB Annual Meeting was a great experience for me and I really feel that I gained a deeper appreciation for research, a better sense for what graduate school will entail for me, and a realization that I am ready and capable of being a scientist.