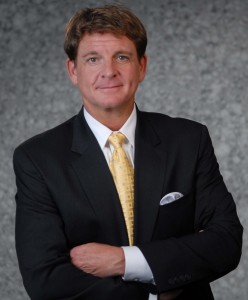 Dennis Gonier '83, CEO of Tarp Worldwide, is the 2010 Williams Executive-in-Residence.

Austin College faculty, staff, and students are invited to the 2010 Todd Williams Executive-in-Residence Lecture, featuring Austin College alumnus and Tarp Worldwide CEO Dennis Gonier. He will deliver a keynote luncheon address titled “Connections,” at noon on Thursday, November 4, in Sid Richardson Center of the Mason Athletic Complex. An alumni career panel will be held at 11 a.m. to 11:50 a.m.

Please RSVP for lunch to Wanda Hardy at whardy@austincollege.edu .

Gonier was Austin College’s 1983 valedictorian, graduating with a bachelor’s degree in political science. He did graduate work at the Institute of Urban Studies at the University of Texas at Austin, and now serves on the Austin College Board of Trustees.

Gonier is the CEO of Tarp Worldwide, a customer service and market research company.

He also worked at America Online (AOL) as the executive vice president following AOL’s acquisition by Time Warner, where he led a dramatic turnaround, delivering over $1 billion in profits during the company’s transition to broadband. Prior to working at AOL, Gonier was the founder and CEO of Digital Marketing Services (DMS), an online marketing services company that pioneered new loyalty strategies and launched online research as an alternative to phone surveys.

Gonier’s innovative thinking now dominates the marketing research industry. He has been named one of the ten “21st Century Stars” changing the face of consumer intelligence and marketing by American Demographics, and he has been quoted in the Wall Street Journal, The New York Times, Brandweek, and others. In addition, he has been published in several academic journals and is a frequent speaker at conferences and universities worldwide.

The Williams Executive-in-Residence Series was established in 2007 by Austin College alumnus Todd Williams, 1984 graduate, and his wife, Abby, as a means to mentor students. “I was a tremendous beneficiary of professors and alumni mentors telling me about doors that I could open when I didn’t even know a door was there,” Todd said, “and its our sincere goal to help provide this same benefit for others at the College.”

David Griffith, associate professor of business administration and holder of the Jack B. Morris Chair in Entrepreneurial Studies, is coordinating this fall’s event.