Austin College’s Department of Music will present senior Andres Hernandez in his senior recital on Sunday, April 3, at 3 p.m. in Craig Hall’s Recital Hall.  The recital is free and open to the public. 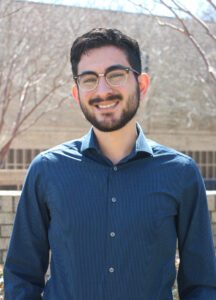 Music is a foundational part of life for Hernandez. He said he began playing violin in the first grade and played in youth orchestras from the fourth grade through his high school graduation in the Hewlett-Euless-Bedford school district. He played in his high school’s orchestra and headed one of the school’s string quartets. He additionally played in youth orchestras in Dallas associated with the Greater Dallas Youth Orchestra, and as a senior in high school, he was concertmaster of the Arlington Youth Symphony.

In addition to his involvement in classical music, he also began playing in mariachi bands as a freelancer in high school, something he continues.

His violin work has not slowed at Austin College. He has been a member of the Sherman Symphony Orchestra and the Austin College Chamber Orchestra for four years. He played for a time with the Student String Quartet and participated in the work of the College’s “Generations” String Quartet.

Completing majors in music and in biology, Hernandez hopes to become a physician and will take a year after graduation to work and further prepare for medical school applications. In that time, he hopes to work in string quartets and mariachis as well as potentially participate in a community orchestra.

Music, he says, has always been his main hobby and a side job. Performance, too, has broadened his thinking. “Studying performance and the nuance and subtleties it entails has helped broaden my way of thinking,” Hernandez said. “A deep level of non-verbal communication and connection is required during performance that can only be developed over time. Working with two different string quartets during my time at Austin College has helped me learn to build those connections. My experience with small ensembles at AC has by far been some of the most valuable I have spent here, and will be times that I look back on fondly for years to come.”

His musical abilities helped in his science courses and preparation for a medical career, too. “As a student also taking a STEM curriculum, keeping myself open to the creative and subjective parts of my liberal arts education has been invaluable in making me a well-rounded student and overall learner,” Hernandez said. “STEM courses focus highly on critical thinking and logical problem solving. Additionally, STEM courses tend to focus on effective scientific communication and collaborative work; I have found that my time working in small ensembles has helped develop my skills in communication.”