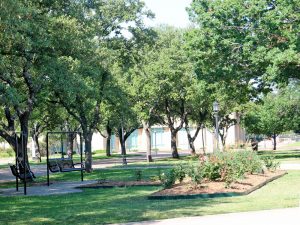 The family decided the Austin College campus would be the perfect site to memorialize Shellie and funded the creation of the rose garden and adjacent swings on the main walkway of the campus near the athletics facilities and facing Abell Library Center. “Austin College is honored to dedicate this Garden of Love in memory of Shellie and her wonderful spirit,” President Hass said at the dedication. Director of Athletics David Norman expressed his appreciation for the family and the friendships he has formed with the entire family.

In addition to Ed and the three sons, Shellie’s parents, Sig and Lee Liberman of Plano, Texas, took part in the dedication of the garden, with a marker reading “Garden of Love in memory of Shellie Ann Hersh, devoted wife, daughter, friend, and loving mother of Jonathan ’09, B.A., ’10 M.A.T., Craig, and Robert.