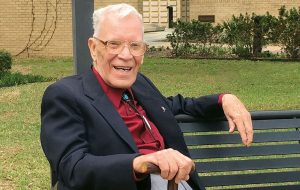 And an Austin College Legend

Dr. Clyde Hall ’46, Austin College professor emeritus of business administration and economics, knows a lot about history, too. His knowledge of and involvement in local history were honored this weekend with the naming of the Dr. Clyde L. Hall Resource Room at the Sherman Museum, newly remodeled and dedicated Sunday by the museum’s Board of Trustees.

In addition to having lived out nearly 100 years of Austin College history, he has collected and researched much about the history of Grayson County and made numerous presentations on his findings. He has been involved in securing official Texas historical markers, writing historical narratives for more than 20 sites, and providing editing and advising on more than 70 more. He was involved in the marker for the coming of the railroad to Grayson County, the Fredrick Douglass School marker, and the Butterfield Trail marker at the courthouse, among others. He has spoken at numerous organization meetings to share his findings about the local area.

Dr. Hall is a 1946 graduate of Austin College (he enrolled as a member of the Class of 1944 but World War II interrupted his education). After leaving town to earn an MBA and Ph.D., he returned to Austin College as a member of the faculty, teaching from 1950 to 1988. He has met eight of the 16 presidents of the College, received most every College honor possible, and two of his four children are also graduates.

Beyond the College, the Sherman Museum’s honor to Dr. Hall is far from the first from Sherman residents. Still, it’s good to see that recognition continues as Dr. Hall approaches his centenarian year.