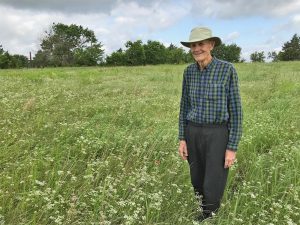 Hugh Garnett at Garnett Prairie – May 2019

The Austin College community mourns the death of Professor Emeritus of Economics Hugh Garnett early today, October 14. Dr. Garnett taught at the College from 1981 until his retirement in 2003. He remained active in campus events until recent months when his health kept him away.

UPDATE: A memorial service will be held Saturday, November 16, at 11 a.m. at Grand Avenue Presbyterian Church, with a reception to follow at Austin College’s Collins Alumni Center.

Memorial contributions may be made to Austin College, The Thomsen Foundation, or a charity of your choice. 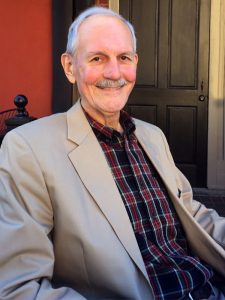 Born in Daytona Beach, Florida, on April 9, 1943, Hugh Garnett was raised in Altus, Oklahoma, graduating as valedictorian of Altus High School in 1961. He earned a Bachelor of Arts degree in economics from Yale University, a Master of Arts degree from the London School of Economics, and a Ph.D. from the University of California, Berkeley.

Although he began his academic career at Southern Methodist University and later taught at the University of North Texas, Dr. Garnett spent the majority of his career, from 1981 until 2003, teaching economics at Austin College, holding the Clara R. and Leo F. Corrigan Sr. Chair of Economics and Business Administration. His professorship was highly regarded by both his students and colleagues.

Dr. Garnett expressed his educational philosophy and values thusly: “I was conditioned from an early age by my parents to believe that education and public service were important, and that teaching people how to think objectively for themselves was the teacher’s duty. After several years of experimenting at Yale with majors in which I had an interest (political science) or some ability (mathematics), I discovered the perfect compromise—economics—and I was hooked. I decided to continue my studies at the London School of Economics, and later Berkeley, where I specialized in macroeconomic theory and public finance. I discovered later during faculty stops at SMU and UNT that pressures to publish diverted most of the economics faculty from their crucial role of teaching students how to think objectively.

But once at Austin College, I was able to return to the vital role of educating future citizens. And the highpoint of my career at Austin College has been the engaged citizenship and professional accomplishments of so many of the students I have been privileged to teach.”

Dr. Garnett frequently expressed how Austin College was the perfect fit for him, given its liberal arts mission and heavy emphasis on quality teaching over research. To commemorate his legacy, the College engaged generous funding from the Will Mann Richardson Lecture Series to invite Dr. Paul Krugman, Nobel Prize Winner in Economics, to deliver an address in recognition of Dr. Garnett’s retirement.

Through his passion for botany and conservation, along with photography and birding, Dr. Garnett became one of the most insightful and perceptive amateur botanists in North Texas. His eye was so adept that he could detect never-plowed, largely intact prairies simply by driving past them. Dr. Garnett’s initial, direct interest in land restoration continued when he purchased 142 acres in Montague County, Texas. Hugh engaged soon-to-be mentors Pete Dunn, Arnold Davis, Lisa Bellows, and Shirley Lusk of the Thomsen Foundation to help him with plant identification and land stewardship. Tommy Thomsen subsequently invited Dr. Garnett to join the Thomsen Foundation in 2007.

Because of his enormous appreciation for the Thomsen Foundation’s mission and passion for sustainable land stewardship and prairie restoration, and their particular aid in returning his prairie to its earlier, native state, Dr. Garnett gifted all 142 acres, now known as the Garnett Preserve, to the Foundation.

Dr. Garnett identified the property as a high-quality remnant of the once-dominant vast tallgrass prairie ecosystem that blanketed north-central Texas, prior to settlement in the early 1800s.

When Dr. Garnett set out to acquire the property, the owner was reluctant to sell, since it was a good, albeit stressed, haying field. The owner agreed to give up the prairie if the buyer would also purchase the adjacent worn-out hay fields. In order to conserve the seven-acre prairie, Dr. Garnett agreed to buy the entire 60 acres.

As with Garnett Preserve, Dr. Garnett not only continued to monitor Garnett Prairie but went out regularly to attack personally the invasive plants, like Johnson grass. While he frequently did this laborious work by himself, often Austin College students would generously volunteer to assist. The Garnett Prairie is used in several biology classes as well as for research, due to it being an exemplary prairie standard used to measure the progress of restoration efforts at other college sites, such as the Sneed  Prairie.

In the pursuit of both his vocation and avocation, Dr.  Garnett exemplified a strong commitment to education in general, Austin College in particular, and to public service and philanthropy.  He will be dearly missed by family and friends.

Dr. Garnett was predeceased by his parents, Hugh Barnard Garnett and Glee Miller Garnett, of Altus, Oklahoma. He is survived by a sister, Jean Garnett Moore (Hugh) of Chattanooga, Tennessee; two nieces, Lela Miller Moore (Steven Aglione) of Brooklyn, New York, and Sarah Garnett Moore of Chattanooga, Tennessee, and one great-nephew, Edmund Moore Aglione, of Brooklyn, New York. He is also survived by an aunt, Ruth Garnett Sharpe of Checotah, Oklahoma, and many cousins.

Memorial contributions may be made to Austin College, The Thomsen Foundation or a charity of your choice.