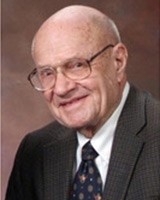 The Austin College community is saddened by the death on February 7 of Dr. Jack J. Jernigan, professor emeritus of English, and extends sympathy to his family. He was 97.

Dr. Jernigan joined the Austin College English faculty in 1967 and spent the next 22 years in dedicated service to the College. He received the College’s Homer P. Rainey Award for distinguished service and excellence in 1985. His service included stints as chair of the English Department, dean of Humanities, and interim Vice President for Academic Affairs and dean of the faculty. He retired August 31, 1989.

Eventually named the Dean of Humanities, Dr. Jernigan continued to teach his students and work alongside his colleagues. One faculty member recalled, “In all my years of knowing him, he was unfailingly both astute and kind, a man of unshakeable integrity, quiet dignity, and intellectual depth. He was also quite funny, though his humor was not universally recognized.”

The world changed considerably throughout his lifetime, and he had the ability to reconsider his views, whether that involved opening a credit card account, replacing masculine pronouns in college documents, or traveling, having declared he’d had all the travel he would ever need while in the U.S. Navy. (The births of his grandchildren abroad may have had something to do with that change of heart.)

The professor had been retired from Austin College longer than his teaching career had been. He had many years of living ahead upon his retirement. That living including involvement at Grand Avenue Presbyterian Church.

“Jack was a person of kind and gentle faith. He was steady in his approach to life. Ever faithful in his care for his wife, Jeannine, he cooked most of their meals later in life, at Jeannine’s direction. He was by her side in her last weeks in the hospital. He missed her terribly following her death.

Jack was a longtime member of the faculty at Austin College. But he quietly did tax returns at no cost for people in need. He happily took on tasks he was asked to perform when he served on the session of Grand Avenue, and completed them thoroughly.  He walked every day for many years, regardless of the weather. He was a kind and generous man. I am thankful for having known him.

Genna and I were able to stop in and visit with Jack in the assisted living facility where he had moved in Garland. He was thrilled to show us around. He was tickled to say, “They gave me the electric chair,” his motorized chair, which he drove so fast around the facilities that we had a hard time keeping up with him.”

Dr. William Moore, emeritus professor of English, shared thoughts on the passing of his colleague:

“I arrived at Austin College with Jerry Lincecum and Jack , having the task of reviving a nearly collapsed English Department, in the year of the calendar change that incorporated the January Term. We three also took leadership roles in the early development of C/I. During the development years of the 1970s and ’80s, many faculty and staff made great contributions, but I think no one was as much a pillar of the College as Jack. Being his succesor as department chair and area dean, I saw his excellence in administration.

In faculty discussions, everyone knew his well-timed offerings would be among the most perceptive and insightful. He was a thoughtful friend to everyone he knew; since I knew many of his student advisees, I could see how reliant on and appreciative of his personal concern for them that they could be. Jack Jernigan should be a well-remembered building of Austin College history.”

He was born August 19, 1923 in Pensacola, Florida to Stephen Douglas and Pauline Gander Jernigan.

Arrangements have been entrusted to Bailey & Foster Funeral Home in Palestine, Texas.

He proudly served as the coxswain on his ship in the US Navy during World War II. He visited Hiroshima in the weeks following the bombing and transported Japanese prisoners back to Japan after World War II. He also spoke German.

He did his undergraduate work at Ole Miss, received his PhD at Vanderbilt University, and was an English professor at Austin College in Sherman for many years.

He enjoyed cooking at home and in the Navy, loved reading novels, playing Sudoku, chess, scrabble, and tending to his flowers. But most of all he enjoyed being with his wife, Mimi.

He was preceded in death by his parents, wife Jeannine (Mimi), son Stephen Albert Jernigan, and brother Richard Jernigan.