The Austin College community mourns the October 31 death of Dr. James Franklin Johnson, professor emeritus of classics, and remembers fondly the life and career of the longtime colleague and friend.

As word of Jim’s death spread on Facebook, posts were made about how much students had enjoyed his lectures or how he made his subject come to life, but again and again, from colleagues and alumni alike, came mention of the professor’s kindness. 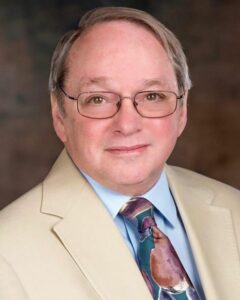 Jim Johnson joined the Austin College faculty in 1977 and retired in 2013. During those 36 years, he taught Heritage of Western Man and Communication / Inquiry, along with his academic specialties—classical civilization, Greek, and Latin—as well as “Classical Mythology,” which was initially a challenge to him but came to be a favorite, he once said.

He also led several January Term study trips to Greece, which he called very rich, life-changing opportunities for him and for his students.

Johnson helped to lead Austin College’s Richardson Summer Language Institute for high school language teachers for many years as well as high school Latin conferences on campus. Very involved in professional organizations, he served in leadership for the Texas Foreign Language Association, and the Classical Association of the Southwestern United States. He was selected as the Texas Foreign Language Association College Teacher of the Year in 1992.

A member of Phi Beta Kappa national honor society, Johnson was active in the foundational work of the Austin College chapter. 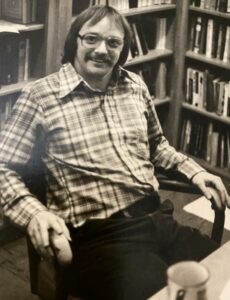 Jim in the early days

In 2016, he wrote the book, Acts of Compassion in Greek Tragic Drama, published by the University of Oklahoma Press. Jim worked on the book, Book 53 in the Oklahoma Series in Classical Culture, throughout his teaching career as time permitted.

Also a lover of music, he played with a band, Saturnalia, during his Austin College days. He enjoyed rock ‘n’ roll and blues music, especially when the electric guitar was involved.

We extend sympathies to his family.

My Dad, Jim Johnson passed away peacefully on Monday, Oct 31. He had been experiencing vascular dementia to an increasing extent for several years. “Battling” or “suffering from” probably would not have been the right words. I’m not sure we ever saw a moment of anger, anxiety, or fear the entire time. He just seemed to be a less functioning version of himself steadily over time. Same sweetness. Same presence. Our family takes great comfort in knowing he was able to let go without that changing.

It’s impossible to look back on what I know about his 75 years of life without seeing how fortunate he was and how lucky we were to have him in our lives. He was a model of modern masculinity: kind, patient, supportive, curious and consistent. Way ahead of his time in that respect. Everyone who knew him felt this.

He found a passion in his studies of Classics as a young man and seemed endlessly fascinated by them. He walked a few blocks to work at Austin College every day for 36 years, where he was respected and loved by his friends, colleagues and students. When he wasn’t working, he loved walking, playing guitar, listening to music, and playing bridge. He was devoted to my mom, Seth and me, our families and his community. I feel lucky they moved nearby when they did. I was glad my family got to spend time with him and my mom in their retirement and was proud to be able to help him through the last few years with the support of Seth, Laura, our girls, Laura’s parents and the facilities who cared for his daily needs. With an illness like this, we feel like we have been grieving his loss for some time now, so it feels maybe a little less stark, but still final.

Our family is considering how we can honor his life in the coming months. We will be certain to pass on any information as details are decided both here and through email. If you would like to send condolences, be notified or know someone who would, please feel free to share this, reach out to me here, or email Seth at setjohns@icloud.com or me at joelmjohnson40@gmail.com