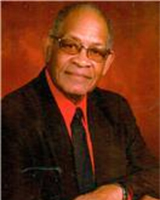 The Austin College community is saddened to learn of the death of retiree Orange Hughes Jr. on August 3, 2020. Orange served as a member of the College’s Physical Plant staff from September 1975 to March 14, 1997, when he retired. He worked for the College in varying roles from October 1972 through August 1975 when he began his long-term role as a painter. Those who worked with him will recall his quick smile and generous spirit. See the family obituary below and offer personal condolences online at www.cravensfuneralhome.com.

From the Herald Democrat

Mr. Orange McGill Hughes Jr. transitioned from life to eternity Monday, August 3, 2020, peacefully at his home. A celebration of his life will be at 11:00 a.m. on Thursday at Parkview Church of Christ. Burial will follow at Cedarlawn Memorial Park. Family visitation will be from 7:00 to 8:00 p.m. on Wednesday at Parkview.

Orange was born on May 9th, 1934, in Sherman, TX, to Orange, Sr. and Minnie Hughes. He accepted Christ and became a member of Music Street Church of Christ at a young age. Orange married Ms. Nellie Callahan, and the two made a life together, parenting six children. He worked as a Maintenance Technician for Austin College and retired from there after many years. At the time of his passing, Orange was a member of Parkview Church of Christ, where he served as a deacon for several years. He was active in various ministries and helped create and build Parkview’s media ministry from the ground up. He is preceded in death by his parents, siblings, Oliva, Audrey, George and Jerry Hughes, and son Orange Hughes III. He survived by children; James Hughes (Ann), Samuel Hughes, Dewayne Hughes, Debra Hughes Whitfield (Charles), and Karen Hughes Spencer (Neal), a host of grandchildren, and other relatives. He was a loving father, a faithful servant of our Lord, and a kind and compassionate brother in Christ. The Hughes family is under the personal care of Cravens Funeral Home in Sherman, (903) 893-6110. Personal condolences can be made online at www.cravensfuneralhome.com.