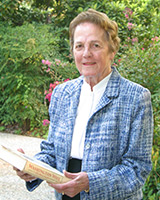 The Austin College community is saddened by the death of senior trustee Carolyn Harte of San Antonio, Texas, on October 8, 2019. She had a long history with Austin College, joining the Austin College Board of Trustees in 1987 and remaining on the senior board until her death.

In addition to providing her experience and influence, Carolyn’s involvement with the College was one of great philanthropy. She and her husband, Houston Harte, who preceded her in death, were generous benefactors of the College. Among other gifts, they endowed the Houston and  Carolyn Harte Middle Income Assistance Endowed Scholarships, specifically to assist students ineligible for federal assistance and not able to pay the entire cost of private higher education. Mrs. Harte also contributed to several other campus initiatives.

A devoted Presbyterian, she also served on the board of Mo-Ranch. In an Austin College article about her philanthropy, Mrs. Harte once said that she liked to offer opportunity to others and to think of what giving can mean for the future. “I want to see students go through Austin College and come out and make a difference in the world,” she said. Hopefully, she saw her wish come true many times over.

A graveside service was held October 14.