The Austin College community celebrates the life of Austin College senior trustee Ellis Olmstead, who died September 2, 2022. He was an active member of the trustees from 1994 to 2006, serving as a long-time chair of the Investment Committee, as well as a member of the Business Affairs Committee. He was a longtime Sherman business leader, particularly within Chapman and Shell Oil. He also was involved in many community affairs, serving on the boards of, among others, Wilson N Jones Hospital, the Sherman Chamber of Commerce, and Grayson County Airport Board, leading all of those.

A memorial service will be held on Saturday, September 10th at 11:00 at Central Christian Church in Sherman.  A private burial will precede the service. The family will host a reception and receive friends at the home immediately following the service. 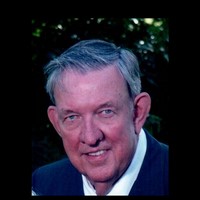 Ellis Lloyd Olmstead (Senior Trustee) went home to be with the Lord on September 2, 2022.  Ellis was born in Galveston, Texas on April 3, 1935, to Erling and Edna (Holmes) Olmstead, both of whom immigrated from Norway.  He graduated from Ball High School in Galveston in 1953 and went on to graduate from the University of Texas with a degree in business in 1957.  Standing 6’10”, he had a successful four-year career playing college basketball and carried a love for the Longhorns throughout his life.

On August 17, 1957, he married Patti Le Chapman at Central Christian Church in Sherman.  They recently celebrated 65 years of marriage.  After they married, they lived in Dallas for a short time, and then moved to Sherman where Ellis joined his father-in-law at Chapman, Inc., a wholesale Texaco gasoline distributor and subsequently a Shell distributorship.  Ellis helped grow the business for almost 60 years and he continued to come into the office until the covid epidemic kept him at home.  He was active in the Texas Oil Marketers where he served as President (1967) and also the National Oil Jobber Council where he served several terms.

Ellis greatly enjoyed his civic activities.  They included serving on the Boards of Trustees of Austin College and Wilson N Jones Hospital, serving as President of the Sherman Chamber of Commerce, serving as Chairman of the Grayson County Airport Board, and many others.  He also received several civic honors including Sherman Outstanding Citizen (1988) and the Emmett Essin Community Service Award (2008).

In addition, Ellis was an avid pilot for over 40 years.  He enjoyed hunting, fishing, ranching and spending time with family.  He was a member and elder at Central Christian Church for many years.

He was preceded in death by his parents and sister, Erlyn Efird.  He is survived by his wife, Patti, his children Kay Ellen Kirby (Kevin), Lee Olmstead (Julie), and Andy Olmstead (Stacey), all of Sherman.  Grandchildren are Emily Kirby of Ft. Worth, Lauren Kirby of Waco, Michal Overturf (Travis) of Sherman, Clayton Olmstead (Mary Virginia) of Dallas, Claire Olmstead of Redlands, CA, and Brett Olmstead of Sherman.  Great grandchildren include great granddaughter Margot Overturf. Nieces and nephews include Chris Efird (Jennifer), Charlotte Efird, Craig Calhoun (Tina), and Jill Knocke (Toby).

In lieu of flowers, memorials may be made to Home Hospice of Grayson County (505 Center St., Sherman 75090) or a charity of your choice.

A memorial service will be held on Saturday, September 10th at 11:00 at Central Christian Church in Sherman.  A private burial will be held preceding the service.  The family will host a reception and receive friends at the home immediately following the service.