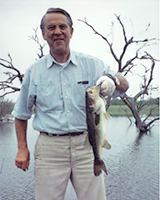 The Austin College community is saddened by the death of longtime Austin College senior trustee Louis H. Zbinden Jr. on September 11, 2020. The Presbyterian leader served on the active board and the College Relations and Church Relations committee from 1973 to 1985, and remained a member of the senior board until his death. A supporter of scholarships and various other Austin College projects, Zbinden was very active in community service in San Antonio, where he was senior pastor of First Presbyterian Church from 1971 until 2004.

A memorial service will be held at First Presbyterian Church on Saturday, September 19, 2020, at 11 a.m. Due to COVID-19 restrictions, maximum occupancy is 150 people. A livestream of his service may be viewed from a link found within his obituary page at www.porterloring.com, where a Guestbook is also available.

See his family’s full obituary below:

Louis met Katherine Shoaf (Kip) during their time at Southwestern, but they did not date until after graduation when they met again at a friend’s wedding. While in the hospital due to a knee surgery, he proposed and they married in 1959. They celebrated 61 years of marriage on August 14 this year.

He served as senior pastor at First Presbyterian Church from 1971 until 2004. Because of his boldness, imagination and faithfulness to God’s call, with the help of his congregation and other religious and civic leaders, many in our city and beyond have experienced new hope and opportunity.

He served as a member of multiple community leadership boards, including Haven for Hope, Mission Road Ministries, Morningside Ministries, San Antonio Medical Foundation, San Antonio Community of Churches, and The Children’s Bereavement Center, among others.

Louis was named Outstanding Man of the Year, Exchange Club Golden Deeds, 1983; honored with the National Council of Christians and Jews Humanitarian Award, 1986; Jefferson Award, Express-News, American Institute for Public Service, 2000; and Peacemaker Award, San Antonio Bar Foundation, 2001. In 2002, he was honored by the naming of the Louis H. and Katherine S. Zbinden Chair of Pastoral Ministry and Leadership at Austin Theological Seminary.

Truly, as God’s servant, Louis Zbinden has been an outstanding leader in our world.

We are joyful in the knowledge that he is walking with his Savior and hearing the words, “Well done, good and faithful servant.”

Louis is preceded in death by his parents, Louis and Mildred Zbinden, brother Ray Zbinden, and an infant sister Jaqueline.

A memorial service will be held at First Presbyterian Church on Saturday, September 19, 2020, beginning at 11:00 am. Due to COVID-19 restrictions, maximum occupancy is 150 people.

Social distancing will be in place and masks are required.

You are invited and encouraged to view his service from the livestream link found within his obituary page at www.porterloring.com.

In lieu of flowers, donations may be made to the Kingdom Restoration Lab at First Presbyterian Church of San Antonio.