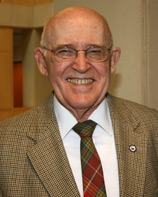 The Austin College community is saddened to learn of the death of Dr. Thomas Kimes, emeritus professor of mathematics, on February 4, 2021.

As is often the case with Austin College faculty, he arrived on campus with plans to remain only a few years. He joined the faculty in 1962, and he has said that he found so much going on at the College that was professionally exciting that there was never a time to leave until his retirement in 1992.

In 1976, he was named to the J.N. Chadwick Chair of Mathematics and served as chair of the Mathematics Department for a number of years. He also served as director of the January Term program for several years. He led several JanTerm trips to England in study of Stonehenge and other archeological sites. He had a special interest in mathematical applications to archeology as well as a love of all things British. He spent two sabbaticals at Cambridge University, one in the Archeology Department.

Immediately before coming to Austin College, Kimes was a numerical analyst in the Bettis Atomic Power Laboratory. Perhaps as a legacy of that work, he had said that he probably did more to make use of the computer in mathematics than many others at that time. In the 1960s, Kimes submitted the original application for the first institutional computer Austin College acquired.

He was the first sponsor of Austin College’s Gamma Gamma Gamma fraternity and served the group for more than 20 years in that capacity before continuing as a patron.

An active Presbyterian, Kimes also was a dedicated volunteer in Sherman, serving for more than 20 years on the board of the Sherman Tutorial and Educational Program (STEP). He also served on the Sherman Musical Arts board.

The family has suggested that in lieu of flowers, contributions can be sent to Knights Templar Eye Foundation, Inc., 1033 Long Prairie Road, Suite 5, Flower Mound, Texas 75022 or to Austin College, online at www.austincollege.edu/giving or by mail to Austin College, 900 N Grand Avenue, Suite 6G, Sherman, Texas, 75090.

Dr. Kimes was a member of the faculty in Mathematics at Austin College (Sherman, Texas) for 31 years, serving as chair of the department from 1968 to 1985, and belonged to a number of professional and honorary societies.

He was a member of Parkway Presbyterian Church of Corpus Christi and an ordained elder.